This dagger from the Egyptian Middle Kingdom (Dynasty 12, ca.... 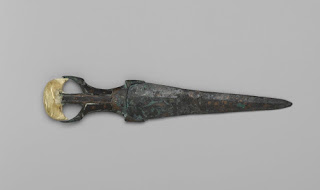 This dagger from the Egyptian Middle Kingdom (Dynasty 12, ca. 1938-1759 B.C.E.) came up to the Conservation Lab for examination and treatment in preparation for an out-going loan. Weapons of this type, with copper alloy blades, inlaid handles and curved ivory pommels, are fairly common in museum collections (ie. this dagger from the Museum of Fine Arts, Boston, and this dagger from The Petrie Museum at University College London).

Because the dagger will be traveling internationally, we had to figure out whether or not its crescent-shaped pommel it is made from ivory, and if so what type, as required by The Convention on International Trade in Endangered Species of Wild Fauna and Flora (CITES). During the course of treatment, modern adhesive joins in the pommel were reversed so it could be examined both in cross-section and longitudinally.

Ivory, a term which describes the dentine of large mammals, is a dense, fine-grained material. Unlike bone, it has a notably laminated structure caused by growth rings, and does not have a canal system.

Neither of these features was visible the dagger pommel. On the other hand, hippopotamus teeth have fine, even and regular concentric lines following the tooth shape in cross-section. This is the only characteristic feature visible on the pommel, and no distinctive features are visible in the longitudinal section.

So, by process of elimination, it looks like we have hippo ivory. To the Ancient Egyptians, hippos were considered highly dangerous, both in daily life and in the afterlife. There are many tomb paintings and reliefs that depict hippos being hunted with harpoons—and the by-product of such hunting was an abundant supply of ivory. However, hippos (like crocodile and frogs) were also symbols of regeneration due to their habit of disappearing under the water and subsequent reemerging.