You are now allowed to bring cameras to Egyptian Museum!


You are now allowed to bring cameras to Egyptian Museum 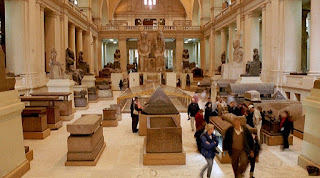 Visitors to the Egyptian Museum are now allowed to come in with cameras, Egypt’s Antiquities Minister Mohammed El Damaty announced.

The general supervisor of the Egyptian Museum, Dr. Khaled Al Anany, said that Egyptian nationals and foreigners were now allowed to take pictures inside the Museum, with no additional cost.

However, photography inside the museum will only be allowed until Jan. 7, leading to speculation that the museum could be set to charge visitors for the privilege in the future.

The decision to allow photography inside the museum is the country’s latest attempt to boost domestic and foreign tourism, which has suffered since the 2011 uprising.