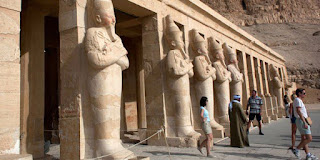 Metal detectors have also been installed on gates at archaeological sites that attract many tourists, Shahin said.

Many monuments were smuggled out of Egypt during the security void that followed the January 25 Revolution in 2011; illegal excavation also went rampant.

A Russian plane crashed in Sinai, killing all tourists on board Oct. 31 with suspicions that a bomb was placed on the jet before taking off. On June 10, a suicide bomber blew himself up outside Karnak Temple in Luxor, Upper Egypt, killing only himself.

The Electricity Ministry has also mulled installing surveillance cameras at pylons after dozens were bombed in the past two years, inflicting losses of millions EGP. The bombings were part of attacks on state-owned facilities that have gone rampant since the 2013 ouster of President Mohamed Morsi.