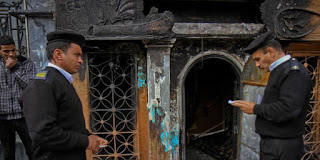 CAIRO: Sixteen staff members of a Cairo restaurant were killed Friday from smoke inhalation caused by firebombs hurled at the place during the early hours of the day, Spokesperson for Health Ministry Khaled Megahed told The Cairo Post.

Police are pursuing the attackers, reportedly three masked men, who threw Molotov cocktails at the doorway of El-Sayyad (translates to the Fisherman) Restaurant, which is also home to a nightclub.

Heavy smoke was captured on camera rising from the restaurant, while the staff was trapped inside.

According to Megahed, most of the victims died of suffocation, adding that two others were injured; one was hospitalized and the other was resuscitated at the scene of the crime. 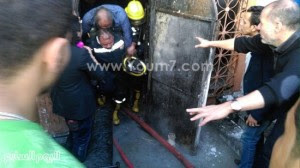 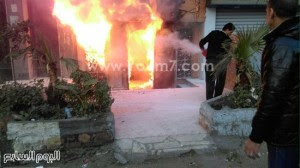 A man standing next to fire at restaurant in Giza, carrying water cannon and trying to put out the fire. Dec,4- YOUM7

A dispute has erupted between the assailants and the restaurant’s guards who banned their entry; the attackers later returned for “revenge,” according to a statement by the Interior Ministry on its Facebook page. Prosecution ordered retrieving surveillance cameras at the fire site to identify the perpetrators.

In his accounts on the attack, the manager of the restaurant, Hussein Hassan said the attackers are “known by the police,” and that it is not their first time to harass and attack restaurants, according to a video interview with Youm7.

“The police was notified with the previous assaults but had not dealt with them; thus giving them the chance to repeat such attacks over and over again,” Hassan added.

Hassan left the restaurant at around 6:15 am after he refused to let them in “due to their thuggery attitude,” as quoted from the video.

On phone, Hassan told The Cairo Post Friday that he had filed a police report on the attack.

The restaurant has two doors; an external one made of steel and another one in wood a half meter away from the first one, according to Youm7 reporter Bahgat Abu Daif who covering the attack and managed to enter the place after the fire.

Daid described the place as small in size and mostly made of wood with a “very narrow” doorway, and a long corridor. The restaurant from inside contains chairs made of leather and a bar serving alcohol.

“The place from inside is completely devastated,” Daif told The Cairo Post, suggesting that the wood and leather might have contributed to the increase the fire and subsequently trapped the employees. 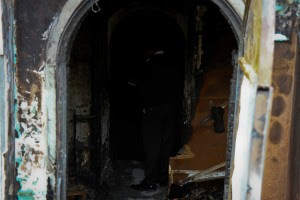 View of the doorway of the attacked Cairo nightclub, Dec.4- Youm7 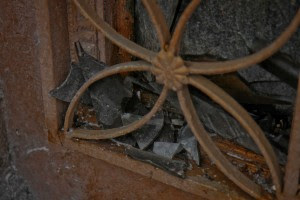 Broken glass of the facade of the attacked Cairo restaurant, 16 killed, Dec.4- Youm7 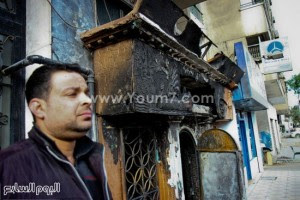 At the time of the attack, only waiters and cleaners were inside after the managers of the place have left, he said, adding that the doorman of the building that hosts the restaurant woke up from the bomb noise.

One of the survivor employees failed to catch the attackers who immediately fled the scene on their motorbike after the fire broke out.

Daif quoted an eyewitness, who claimed knowing the assailants are from Imbaba district in Giza, and reported information to the police.