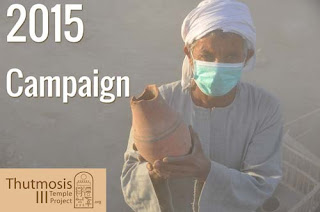 The excavation, restoration, conservation and site management project of the Mortuary Temple of Thutmosis III, located on the West bank of Luxor, first began in 2008.  This has been a collaborative project between the Supreme Council of Antiquities of Egypt and the Academy of Fine Arts of Seville, Spain.

The team is directed by Dr. Myriam Seco Álvarez and Dr.Nur Abd el Gafar Mohamed. Both coordinate the investigations at the Mortuary Temple of Thutmosis III, known to the ancient Egyptians as a Temple of Millions of Years.  This temple was built for a pharaoh considered to be the “Napoleon” of Ancient Egypt.  He is one of the most important pharaohs of the New Kingdom.

Since the beginning, the project has been supported by the Spanish Embassy in Egypt, and is sponsored by BOTIN FOUNDATION and BANCO SANTANDER. From 2013, CEMEX has also donated funds to support the project. As a result of the support of our sponsors, we have been able to extend our work season to three months a year.  This has given us a greater opportunity to increase our knowledge of the temple, and to restore and preserve more of this significant monument.

We are collaborating with the Faculty of Fine Arts and Archaeology at the University of Granada, in order to enable Masters Degree students to gain practical experience on the site.  Professors from the University of Granada are directly involved in training Inspectors from the Supreme Council of Antiquities of Egypt in various specialties, such as topography, documentation and database entry.  We have also organized a field school on the site in collaboration with Santander Universities (Banco Santander).

We are also collaborating with the Materials and Topography Laboratories of the Polytechnic University of Cataluña, Spain.  Topographic works will constitute the execution of photogrammetric restorations of the Mortuary Temple of Thutmosis III, whilst the Materials Laboratory will study the various materials used for the construction of the Temple.

We would like to thank the Secretary General of the Supreme Council of Antiquities, for his support and for entrusting us with this research.