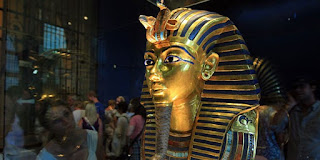 CAIRO: The golden mask of Tutankhamen will be on display again at the Egyptian Museum Dec. 16 after two months of restoration, Antiquities Minister Mamdouh al Damaty announced Wednesday.

"A news conference will be held Wednesday Dec. 16 at 6:00 p.m. to announce the details of the restoration works carried out by the German-Egyptian team of experts," state news agency MENA quoted Damaty Wednesday.

The team, led by Christian Eckmann, started the restoration of ancient Egypt's most iconic artifact in October; a year after its beard became detached during routine cleaning and then was hastily reattached with epoxy.

"The restoration work including scrapping off the epoxy, removing the beard and reattaching it using scientific methods, was carried out in a special laboratory in the Egyptian Museum," Damaty said.