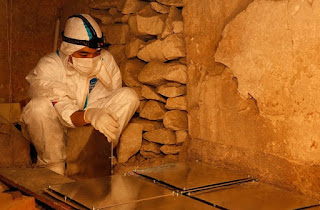 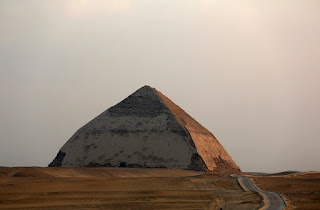 The current work focuses on the Bent pyramid, so named because of its sloping upper half. 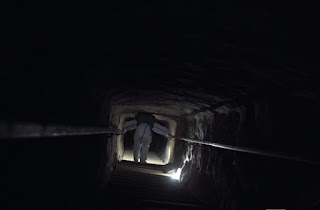 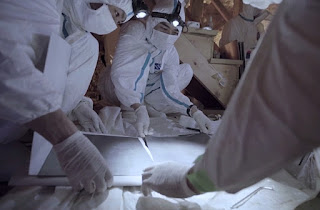 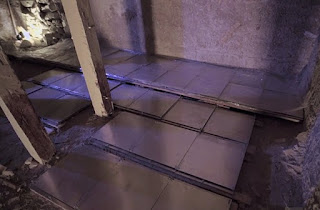 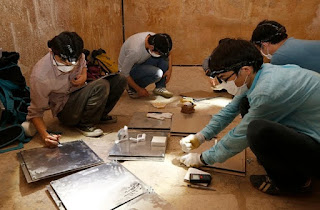 Some 40 plates have been placed inside the Bent Pyramid in Dahshur in an attempt to capture cosmic particles, Egypt's Ministry of Antiquities announced early today.

The installation (explained in this video) is part of an ambitious project using muons, or cosmic particles, to investigate Egypt’s main pyramids. The aim is to detect the presence of unknown internal structures and cavities within the pyramids and learn about the monuments’ construction techniques.

Called ScanPyramids, the study is in its first stage and is being carried out by a team from Cairo University’s Faculty of Engineering and the Paris-based non-profit organization Heritage, Innovation and Preservation under the authority of the Egyptian Ministry of Antiquities.

The project uses a mix of innovative technologies such as infrared thermography, muon radiography, and 3-D reconstruction to look inside four pyramids, which are more than 4,500 years old. They include Khufu, or Cheops, Khafre or Chephren at Giza, the Bent pyramid and the Red pyramid at Dahshur.

"The first phase, consisting in a short infrared survey, has been completed on 8 November 2015. We have already revealed one of the most important thermal anomaly on the east face of the Great Pyramid," explained Mehdi Tayoubi, co-director of the ScanPyramids mission with Hany Helal, professor at Cairo University's Faculty of Engineering and former minister of research and higher education.

“The rest of the results will be announced in January 2016,” he added.

The current work focuses on a muon radiography survey and the first pyramid to be investigated is the Bent pyramid, so named because of its sloping upper half.

Built by Snefru, founder of the Fourth Dynasty, the monument is the first with smooth faces after generations of stepped pyramids.

The monument has two entrances, one on the north side and one on the west side. These entries open on two corridors leading to two burial chambers arranged one above the other.

Cosmic-ray muon radiographies are expected to provide more information about its construction.

The technology relies on the muons that continually shower the Earth’s surface. They come naturally from the upper layers of Earth’s atmosphere, where they are created from collisions between cosmic rays of our galactic environment and the nuclei of atoms in the atmosphere.

“Just like X-rays pass through our bodies allowing us to visualize our skeleton, these elementary particles, weighing around 200 times more than electrons, can very easily pass through any structure, even large and thick rocks, such as mountains,” Tayoubi said.

Plate detectors placed inside the pyramid allow researchers to discern void areas -- these are places where muons cross without problem -- from denser areas where some muons are absorbed or deflected.

A team led by specialist Kunihiro Morishima, from the Institute for Advanced Research of Nagoya University, Japan, has just completed the installation of muon detector plates inside the Bent pyramid’s lower chamber.

Covering a surface of about 10 square feet in the pyramid’s lower chamber, the plates contain two emulsion films that are sensitive to muons. They will be left at the site to accumulate data.

In early 2016, the films will be processed in Cairo. Then they will be analyzed o generate muon radiographies images, potentially revealing hidden chambers in the pyramid.

“In case a void is detected, the images generated from the emulsion film analysis show a contrast difference,” Tayoubi said.

“The principle is that you have to count the muons. Then you scan and process the image to generate an image with contrast,” he added.

The difficult part of the technique is to produce highly sensitive detectors, which can be either gels like the ones used for silver prints or scintillators. Enough data then needs to be accumulated over days or months to emphasize the contrasts.

In order to find out the best chemical formula of the emulsion films, plate samples have already been installed in the Queen Chamber of Khufu’s Pyramid.

“We need to find the best formula for the environment inside the pyramid. The installation will be completed at a later stage in 2016,” Tayoubi said.

“An electronic muon scintillator is also under construction,” he added.