Egypt at the Met | Irish Car+Travel

Egypt at the Met 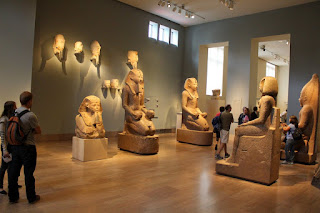 The Metropolitan Museum of Art in New York is arguably one of the best institutions of its kind in the world, writes Brian Byrne.

Affectionately known as the ‘Met’, it dates back to 1866, with its main building located on Fifth Avenue inserted into Central Park.

Those living in New York are fortunate in that they can visit and revisit on a regular basis, but for those of us on flying trips the vastness of the collection, and even the individual collections within the whole place, means there isn’t time to properly absorb even a small part of it.

I recently had a couple of hours to spend there, and decided that the only thing to do was take a run around one section, in this case the Egyptian Art Collection.

Even then, as there are some 26,000 objects of artistic, historical and cultural importance from between 300,000 BC and 4 AD, it was a case of moving too swiftly between the 39 galleries, photographing as much as I could to further study later.

There are also watercolor facsimiles of Theban tomb paintings, most of which are copies produced between 1907 and 1937 by members of the Graphic Section of the Museum’s Egyptian Expedition.

There’s also the Temple of Dendur from about 15 BC. Located in Lower Nubia, about 50 miles south of modern Aswan, the temple was dismantled to save it from the rising waters of Lake Nasser after the construction of the Aswan High Dam. It was presented to the US as a gift from the Egyptian government in recognition of the American contribution to the international campaign to save the ancient Nubian monuments.

More than half the collection is derived from the Met’s own 35 years of archaeological work in Egypt, from 1906.

The pieces, even without dedication or caption, are simply beautiful to behold in their own right. I’m no Egyptologist, so I won’t even try to explain any of it. Just, as I did, enjoy the visions.

Then make sure you set some time for a visit of your own to the Met the next time you visit the Big Apple.