Discovery of the century?

If recent radar investigations ultimately prove that Tutankhamun’s tomb was the last resting place of the lost Queen Nefertiti, it would be the most remarkable archaeological discovery of the 21st century. Nevine El-Aref accompanied the mission during its three-night exploration of the Valley of the Kings 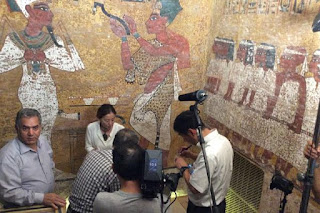 Egyptologists now believe that they are a step closer to finding a royal burial chamber as radar scans reveal two void spaces behind the west and north walls of Tutankhamun’s burial chamber. This result adds weight to the theory launched in August by British Egyptologist Nicholas Reeves claiming that the burial place of Queen Nefertiti is hidden inside the tomb of his son-in-law, the golden King Tutankhamun.

Reeves came up with his theory after a close examination of high resolution 3D laser scan photos taken by the Spanish Factum Arte Organisation to create a replica of Tutankhamun’s tomb, now erected in the area adjacent to the rest-house of its discoverer, British archaeologist Howard Carter, on Luxor’s west bank.

But until the radar scans began last Thursday, the evidence ran no deeper than a field examination on the surface of the walls and an infrared thermography survey to measures the temperature distribution on both walls. It indicates the presence of an area different in its temperature than the other parts of the northern wall.

It was the first time radar scans were conducted in the tomb, representing a crucial step in the investigation.

At dusk, when tourists left the site and the Valley of the Kings fell silent, Minister of Antiquities Mamdouh Eldamaty, along with Reeves, Japanese radar specialist Hirokatsu Watanabe and Egyptian Applied and Environmental Geophysics professor from the National Institute of Astronomy and Geophysics Abbas Mohamed moved into Tutankhamun’s tomb which was a hive of activity.

Almost two dozen archaeologist, scientists and technicians were inside the tomb, their devices connected to electronic wires sprawled every which way on the floor of the tomb’s entrance yard. Watanabe was left alone in front of the burial chamber’s west wall with his Japanese-made Koden-brand radar machine.

At a distance of five centimeters from the wall Watanabe placed his machine and slowly started to push the trolley on which was installed the radar device, monitoring the waves and reflections which appeared on a tiny computer screen suspended at the top.

The tomb was completely silent and all eyes were fixed on Watanabe, especially his face, as if the team was looking for a sign.

When he reached the centre of the wall, Watanabe stopped the scanning and asked for a rope. We didn’t know exactly what had happened. It looked like Tutankhamun’s curse had arrived but a few minutes later Watanabe resumed the scanning without the rope. When Watanabe reached the centre of the wall he shouted, “There is a change of material here”. The point on the wall was actually where Reeves believes contains the traces of a hidden doorway. Watanabe re-scanned the wall and then proceed to the north wall.

After scanning the north wall, he examined the multi-coloured signs shown on the computer screen and noticed that the first part of the north wall was solid while its second half showed changes in material which indicated the existence of something which he could not identify.

“There is, in fact, an empty space behind the wall based on radar, which is very accurate, there is no doubt,” Watanabe told Al-Ahram Weekly. He said that obviously this void space was an entrance to a very deep “something”. At this point, Watanabe could not determine the size of the hollow space behind the wall; the data had to be analysed in order to better understand it and to come up with the correct results.

Eldamaty described the results of the radar scans as “good and positive”. He told the Weekly that “although we do now believe 90 per cent that the west and north wall conceal something behind it, probably a burial chamber, more work is needed to yield accurate results. “The scans will be sent to Japan for further analysis, which will take around one month to complete.”

“My close examination of these scans highlight the apparent presence of closed doorways on the west wall, potentially leading to an additional Tutankhamun period storeroom,” Reeves told the Weekly. “The radar, behind the north wall seems pretty clear.

“If I am right, it is a continuation of the tomb, which will end in another burial chamber. It does look indeed as if the tomb of Tutankhamun is a corridor tomb and it continues beyond the decorated burial chamber.

“I think it is Nefertiti and all the evidence points in that direction,” Reeves said, but warned that even the most minor of incisions in the wall could damage the inner chamber that may have been hermetically sealed for many years. “The key is to excavate slowly and carefully and record well. The fact is this isn’t a race. All archaeology is disruptive. We can’t go back and re-do it, so we have to do it well in the first place,” Reeves said. But, “I am feeling more certain today than I expected to be”.

“Research does not always translate into reality. But it looks like we are headed in the right direction, and our investigations are going well,” Reeves added.

“We cannot be 100 per cent sure of the data given by radar until studying and analysing it in order to provide an accurate result,” Mohamed told the Weekly.

If Watanabe is sure that the north wall has a void space behind it, “I think, from my reading of the given radar data, it is not that big and it would be only a hole. We have to be cautious before announcing any results,” Mohamed pointed out, adding that the data has to be completely analysed in order to know the type of shape that appeared on the radar computer screen, whether it was a result of the existence of a void or any disturbance in the soil.

Mohamed said the bedrock of the Valley of the Kings is made of choky limestone, which contains several cracks, gaps and fractures. It is also soluble in water. This type of rock could easily form caves. Hence, said Mohamed, “We have to eliminate any theory in order to be sure that the void space is a result of the existence of a chamber and not the result of a rocky component.” He said that radar would reveal much more than any other type of scan, and that it was likely to track any blocked-over partition or doorway. “It should be very clear and accurate after conducting several analyses and comparing it with each other.” The radar is a non-invasive and non-destructive means used to not only explore archaeological sites but to detect caves, infrastructures and petrol resources, among others.

Ray Johnson, the director of Chicago House, an epigraphic research centre of the University of Chicago based in Luxor, told National Geographic that most people in the field are intrigued by Reeves’ work -- with some reservations about his conjecture that Nefertiti might be entombed there. “The idea that perhaps this is a burial of somebody specific — that’s a little harder sell,” Johnson said. “There just isn’t a lot of evidence one way or another. That’s something that a lot of our colleagues have a problem with, being very specific about what may be behind any partition walls.

“But at the same time we accept the fact that if there are additional chambers found, there’s a possibility that they are storage chambers. And the possibility of another burial is really intriguing and exciting. But who can be there? We’re missing the entire royal family, except for Tutankhamun. It could be anyone. But the possibilities are wonderfully exciting.”

Eldamaty supports Johnson’s argument. “If a chamber is concealed behind the wall it would never be for Nefertiti but maybe for Tutankhamun’s mother Queen Kiya or his sister Queen Meritamun.”