Object Biography # 19: The Book of the Dead of Padiusir | Egypt at the Manchester Museum

Object Biography # 19: The Book of the Dead of Padiusir

For the first time in its history, Manchester Museum is currently displaying (sections of) a copy of the Egyptian ‘Book of the Dead’.  Despite the negativity implicit in its modern title, the ‘Book of the Dead’ is, in fact, an extremely optimistic document. Hollywood has a lot to answer for in, Sam Raimi’s ‘Evil Dead’ series and ‘The Mummy’ franchise having conjured up an image of a forbidden text that must not be read aloud for fear of waking demonic forces.

In fact the ancient Egyptian name for the collection of texts can be translated as ‘Spells for Coming Forth by Day’. These spells – and accompanying images – act as both a guidebook and a passport to the afterlife, assuring a successful transition to the blissful ‘Field of Reeds’ after death. The key part of that transition is the judgement before Osiris, god of rebirth, and the most well-known vignette in the Book of the Dead is the scene of this judgement. The deceased is shown before a set of scales on which his or her heart is weighed against the feather of Truth. Usually, the feather is shown as heavier than the heart and thereby a positive outcome for the trial is magically assured.

Other texts – or ‘chapters’ – in the Book of the Dead are designed to protect the deceased against misfortune on the journey to, and existence in, the afterlife. Copies of the Book can run to many metres in length and would have been rolled up into scrolls, deposited in the tomb, within the 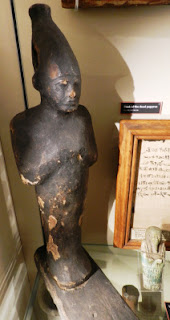 coffin or directly wrapped with the mummy. Hollow statuettes, known as Ptah-Sokar-Osiris figures, were common in elite burials of the 19th-22nd Dynasty as receptacles for Book of the Dead papyri.

The Book of the Dead currently on loan to Manchester Museum from the John Rylands Library is early Ptolemaic (c. 300 BC) in date. In common with many such papyri, the long roll has been cut up into sections for sale, which are now located in museums around the world. This copy was made for a man named Padiusir, and shows the deceased a number of times in standard vignettes. There are clear examples in some cases of a prefabricated papyrus, with the name of the deceased added secondarily.

Sections from late copies of the Book of the Dead, similar to Padiusir’s, have in the past been interpreted as key texts within The Church of Latter-Day Saints, and are the subject of extensive debate. Egyptologists tend to agree that this most common of ancient Egyptian religious compositions was for the benefit of the deceased, and is in no way likely to bring about a curse for the living.