THE FIRST RAYS OF THE NEW YEAR — NILE Magazine 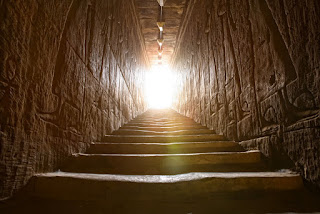 THE FIRST RAYS OF THE NEW YEAR

A priestly procession carries Hathor's statue, rejuvenated by the sun.

The Egyptian New Year was celebrated in July, which coincided with the annual rising of the Nile. The inundation brought with it the promise of abundance. This was a time to give thanks to the cycles of fertility and renewal.

On the east and west sides of the Temple of Hathor at Dendera are staircases leading to the roof. During the early hours of New Year's Day, a sacred shrine containing a statue of the goddess emerged from its sanctuary and was carried up the stairs.

The walls of the stairwell show priests carrying sacred objects and Hathor's shrine. On the roof is a kiosk to which the statue was taken to receive the first giving rays of the sun-god at the dawn of the New Year.

The western stairwell was decorated with images of the pharaoh, his priests, and the shrine ascending to the roof. Once the goddess had been revitalised by the sun, she was carried back down the staircase on the eastern side (pictured), which was decorated with the procession descending.

This part of the temple dates from the first century A.D. The goddess Hathor had been worshipped at Dendera since the Old Kingdom, but the temple we see today was only begun in the 30th Dynasty, with much of the building undertaken by the Ptolemies and Romans.

Temple building by the Greek Ptolemies and the Roman Emperors wasn't an act of worship by devout pharaohs; for the most part they weren't unlikely to believe in Egypt's foreign (to them) assortment of animal-headed gods. The motivations for the construction boom this late in Egypt's history were driven more by propaganda than piety. Having themselves portrayed on temple walls as pharaohs maintained the ancient tradition of the divine king on the Egyptian throne, supported by the influential priesthood.
It was good politics to keep the powerful clergy on side.