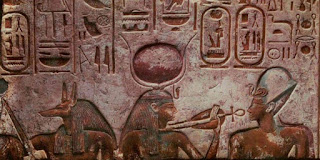 CAIRO: The Antiquities Ministry announced Sunday it received an ancient Egyptian wall relief that was repatriated in October by Egypt’s embassy in London.

The painted limestone wall relief was delivered to the Egyptian embassy in London after its owner, who bought it from a British antiquities collector, learnt it had been  stolen and smuggled out of Egypt, Antiquities Minister Mamdouh al Damaty said in a statement Sunday.

The artifact dates back to the reign of the 19th Dynasty Pharaoh Seti I (1290 B.C. – 1279 B.C.) Damaty said, adding that it will be displayed at the Egyptian Museum in Cairo.

Originally located in an ancient Egyptian temple in Upper Egypt’s governorate of Asyut, the limestone relief was smuggled out of Egypt in 1970, the foreign ministry said in a statement last week.

Egypt’s political turmoil has led to a security lapse at archaeological sites and storerooms and museums nationwide, leaving Egypt’s treasures vulnerable to looting. The Egyptian museum and Malawi museum are among the sites that have been affected.

During the past four years, Egypt has recovered over 1,600 artifacts and is currently working on other cases in many European countries, Ministry of Antiquities Museums Sector head Ahmed Sharaf previously told The Cairo Post.

“It is impossible to provide an accurate number of the artifacts that have been stolen since the January 25 Revolution,” he said.