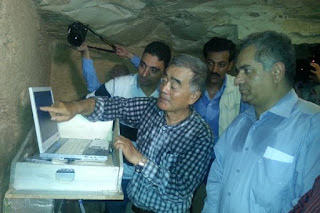 Kneeling on one knee near the entrance of King Tutankhamun’s tomb, Japanese radar specialist Hirokatsu Watanabe is in front of his radar device trying to decipher the multi-coloured images that appear on its screen after a long day of scanning.

I quietly approached the 73-year-old expert who is remarkably fit for the job. He had steadfastly refused all requests for interviews. I was very cautious; he appeared to have a short temper. On site he was always shouting without — at least it seemed — justification. Still, the interview was granted.

Why were you chosen to conduct the scanning survey on Tutankhamun’s tomb?
First, I want to thank the Ministry of Antiquities and the Egyptian government for providing me with this great opportunity to scan the walls of Tutankhamun’s tomb. I was also chosen to conduct the radar scan because I am not a stranger to such work. I previously used radar to identify hidden ancient monuments in South America. Fifteen years ago, I worked in the Valley of the Kings on another [Nicholas] Reeves project. Those scans revealed a number of anomalies that appeared to be underground chambers, one of which turned out to be a tomb although the others have yet to be investigated further. Both of these projects involved radar machines that pointed downward. Such equipment is generally used by engineers; the radar can locate rebar in bridge decks, for example, or find structural weaknesses.

Is this the same technique used in the scanning process of Tutankhamun’s tomb?
Tutankhamun’s tomb is different. I needed to scan sideways, through the walls. To do this, I adapted a Japanese-made Koden-brand radar machine. The body and antenna normally sit on a small-wheeled trolley, pointing straight down. I commissioned a Japanese company to remove the radar, turn it sideways, and reattach it to the trolley.

How does it work?
Radar stands for Radio Detecting and Ranging and as indicated by the name, it is based on the use of radio waves. Radars send out electromagnetic waves similar to wireless computer networks and mobile phones. The signals are sent out as short pulses which may be reflected by objects in their path, in part reflecting back to the radar. When these pulses intercept precipitation, part of the energy is scattered back to the radar. This concept is similar to hearing an echo. For example, when you shout into a well, the sound waves of your shout reflect off the water and back up to you. In that same way, the pulse reflects off precipitation and sends a signal back to the radar. From this information the radar is able to tell where the precipitation is occurring and how much precipitation exists.

That is why the most important thing that I want everybody to know is that the multi-coloured images that appear on the radar screen are not real figures but reflections of the waves. Preliminary data requires decoding, conversion and analysing in order to give a correct result.

What did the radar reflect from the walls of Tutankhamun’s tomb?
It gave us data about the material structure of the walls and their paintings as well as the open spaces behind them. It is these spaces that are most intriguing. They could contain artefacts and possibly even burial goods that rival those found with Tutankhamun.

How accurate is the radar data?
The radar data is very accurate and here in Tutankhamun’s tomb I scanned the walls several times in order to be sure of the data it gave, and every time it showed the same information. I am almost sure that Reeves’ theory is correct but I cannot say [for certain] until completing my analysis.

Radar would reveal much more than any other type of scan, and it was likely to track any blocked-over partition or doorway. It should be very clear.

I have been working in this field for 40 years now and I have enough experience to read and efficiently decode the data given by radar when scanning a piece of land. I am definitely able to differentiate between what lay beneath it, if it is a monument or a normal rock or anything else.

When will you be able to give correct results of the radar readings?
I cannot give a specific time but upon my arrival in Japan I will re-examine the data, analyse and decode it and put it on a file to be sent to both Reeves and [Minister of Antiquities Mamdouh] Eldamaty.