Nearly a dozen UC Berkeley faculty members will play key roles in four multi-university research projects funded this year by the UC Office of the President to catalyze interactions across the 10-campus system. 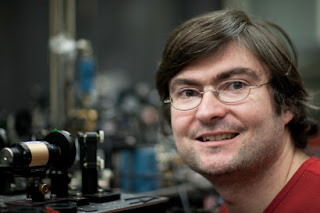 One of the projects will be led by UC Berkeley physicist Holger Müller, who received $300,000 over two years to expand a search for dark matter, mysterious particles that have yet to be seen but which make up 85 percent of the matter and a quarter of all the energy in the universe.

As part of the “Network of Sensors for Exotic Physics” project, UC Berkeley, UC Santa Barbara and UCLA physicists will employ sensitive probes to search for ultra-light subatomic particles believed to constitute dark matter, in hopes of identifying the basic building blocks of the universe. UC Berkeley physicist Dima Budker is the co-principal investigator for the project.

The 2016 President’s Research Catalyst Awards, chosen from a pool of more than 180 proposed projects, were announced Dec. 7 by UC President Janet Napolitano..

“Some of the most important research happening today is interdisciplinary and collaborative,” Napolitano said. “With these awards we are creating new opportunities for those kinds of productive partnerships while furthering research that ranges from archaeology to particle physics.”

Napolitano launched the President’s Research Catalyst Awards in December 2014. The program channels $10 million over three years to fund research in areas of strategic importance, such as sustainability and climate, equity and social justice, health care and basic discovery. To qualify, projects must be multi-campus, multidisciplinary efforts that offer research, teaching and learning opportunities for undergraduate and graduate students. This year, applicants were also asked to incorporate public engagement and faculty mentorship components into the projects.

The four 2016 awards, totaling over $4.8 million, focus on protecting biodiversity. enhancing agricultural resilience in times of drought and preserving cultural heritage sites in the Middle East, as well as the detection of dark matter.

The other projects are:

More information on the program is available on UCRI’s Catalyst website. Additional detail regarding these awards is available in the 2016 Awards List.