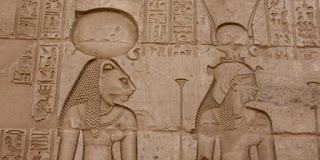 CAIRO: A pink granite statue of the ancient Egyptian war Goddess Sekhmet was sold at $4.1 million Tuesday at the US-based Sotheby’s auction house.

The lot, which dates back to the reign of the 18th Dynasty Pharaoh Amenhotep III (1403 B.C-1365 B.C.,) is a part of a collection of “Ancient Egyptian Sculpture & Works of Art.” offered for sale Tuesday.

The collection comprises of 46 artifacts dating back to several eras of the pharaonic period (3200 B.C.-332 B.C.) Most of the artifacts in question were sold at prices more than the estimated prices set by Sotheby’s.

The Sekhmet statue was sold although Antiquities Minister Mamdouh al Damaty said late November that “the ministry has taken all legal measures to stop the sale of the collection along with other sets of authentic artifacts up for sale in the U.K.’s Christie’s and France’s Mellon auction houses.”

The artifacts were spotted online mid-November by officials at the Antiquities Ministry’s Restored Artifacts Department (RAD.)

“When contacting auction houses and asking for the suspension of the sale until the legitimacy of the artifact is proven, most refuse to engage with the office, and say they have not received any legal notices from their home country to suspend the sale,” RAD head Ali Ahmed told The Cairo Post.

Egypt’s political turmoil since the January 25 Revolution in 2011 and its consequent security lapse have left the country’s cultural heritage vulnerable to looting.

“In order to stop the sale of an artifact, Interpol requires information related to the laws of the country where the artifact was detected,” Ahmed said.

The required information includes when and where the artifact was taken, along with a full description of the artifacts Ahmed said, adding that since stolen artifacts are not listed in the ministry’s archive and because he has only seen their online photos at the auction house website, his office is unable to track their history and know where they were taken from.

“The complexity here is that the antiquities trade was legal in Egypt until the Antiquities Protection Law was issued in 1983,” Ahmed said. “When an unregistered stolen artifact pops up on the Internet, we are unable to determine whether or not it was smuggled from Egypt before 1983.”

The Sekhmet statue represents the lion-headed goddess seated against a back pillar with her hands resting by her knees, the right hand open while the left hand holding an ankh, and wearing a long close-fitting dress with a broad collar.

Maj. Gen. Ahmed Abdel Zaher, head of the Antiquities Investigations Department, echoed Ahmed’s statements, and said there is no record of how many antiquities have gone missing, as many artifacts were stolen during illegal digs, and there is no way to know they even exist.

“It is also difficult to know exactly when these items arrived on the legal market and in which way, because it is possible they pass through different countries and different private sellers, and can get several provenances before reappearing in a legal auction,” Abdel Zaher previously told The Cairo Post.

In order to transport goods to market countries, the stolen artifacts usually pick up export certificates in transit countries, he added.

During the past four years, Egypt has recovered more than 1,600 artifacts and is currently working on other cases in many European countries, Ahmed said.