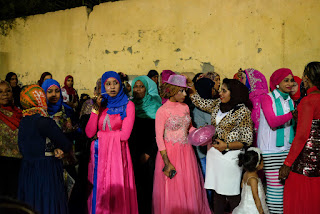 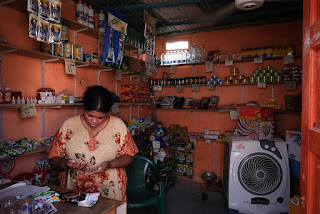 With tourism revenue drying up, women have started looking for work in other domains, like this shopkeeper running one of the only two corner stores on the island of Suheil. 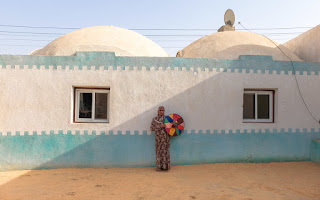 A woman from West Aswan stands in her courtyard holding up a 'tegiddy' that she made, an embroidered food cover built from date palm stalks. 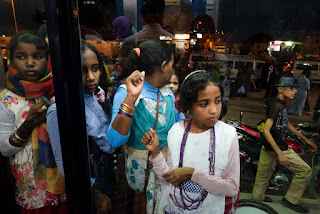 Teenage Nubian women look through the window of a photography studio in downtown Aswan. 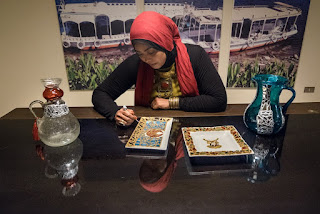 Nubian artist Saly Sayed works from her home in Cairo. Holding a degree in archaeology, Saly turned to art to design contemporary decorative and art pieces inspired by Nubian and I... 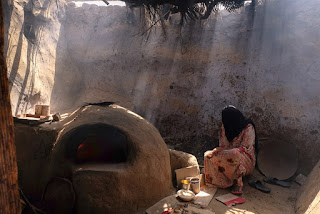 In preparation for a henna party, at the height of wedding season in Nubian villages between Eid el Fitr and Eid el Adha, a woman on Suheil Island bakes loaves of bread in her comm... 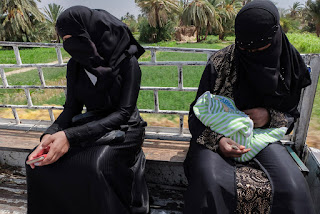 West Suheili women, one on her phone and the other looking at her newborn, travelling on the local form of public transport - the backs of pick-up trucks setted with wooden seats. 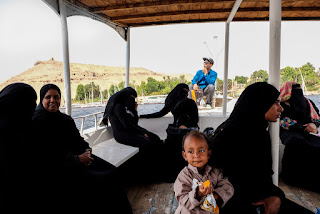 Women travelling to West Aswan on a taxi boat. Aswan is southern Egypt's major city, and an important crossroads of economic and tourist activity for Nubia. On it's West bank, call... 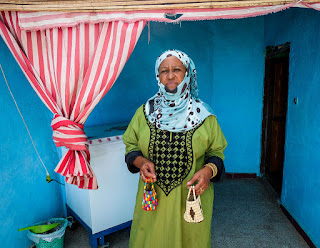 A woman in Suheil Island holds up the baskets she has been making for tourists for over 20 years. In better times, she would welcome tourist groups into her home, offer tea and foo...

The Nubians, inhabiting a 700 mile stretch of Nilotic villages between Egypt and Sudan since as far back as Pharaonic times, have been around for the most of Egypt’s long history.  Living in close proximity to the Nile and dependent on its flow for travel and sustenance, the ancient river played both an affirming and destroying role in Nubian survival throughout millennia.  Through it came slave traders, yet by it life grew in an otherwise desert climate. And under it, historical Nubia was eventually submerged by the floodwaters caused by Gamal Abdel Nasser’s largest dam project, the High Dam of 1964. As a result, some 50,000 Nubians from 45 towns were forcibly resettled into ‘New Nubia’, a vast concrete housing site far from cultivable land. The already common migratory trend of men going abroad for employment augmented after this catastrophic loss of land, affecting the community in new ways.

Nubians repeatedly overcame dire predictions made of their community’s cultural survival after their ‘Nakba’ (in reference to the 1948 Palestinian expulsion from their land). Renowned for an enduring capacity for adapting, Nubians have managed to assert an autonomous voice and political will while also choosing to take on Egyptian identity when desired.

As Africa’s oldest black civilisation, a cultural minority in Egypt and devoutly Muslim, I was interested in contemporary Nubian lives, especially those of women. In the post-2011 revolution upheavals, I wanted to look at their identity in a new context of political instability and the dwindling tourist economy in Egypt. Tourism had become Nubia’s mainstay after the building of the Dam introduced a new flurry of attention in the region’s ancient kingdoms and temples, and had led to numerous social transformations – not least for women, which anthropologist Anne Jennings describes in depth in her updated ethnography on women in rural Aswan.

Women in Nubian villages have been an active part of the local tourist trade by contracting tour operators to bring Western tour groups into their homes, serving them local food and drink for a fee, and setting up opportunities to sell them hand-made artefacts. Anne Jennings points out that while the tradition of Nubian women earning money independently of men had startd to valorize their domain and status, she now notes how the tourist trade is being taken out of the hands of village women due to a number of recent factors – especially economic and religious.

With the economic duress reducing tourist activity in Nubia, women’s roles in this Muslim society are again in flux. How will the loss of such wage opportunities devalue the feelings of personal security, esteem and independence that Nubian women once possessed as major participants in these activities? How are women’s roles as guardians of cultural continuity playing out in new ways?