From the Giza Plateau outside Cairo to the Al-Assassif Necropolis in Luxor, a host of archaeological events and new discoveries took place this week, writes Nevine El-Aref 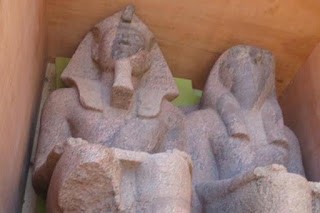 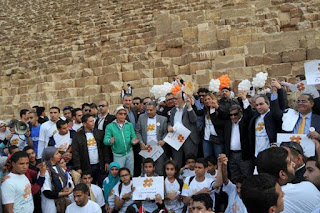 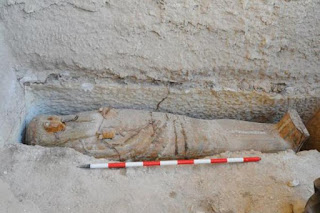 A well-preserved anthropoid sarcophagus of a 22nd Dynasty nobleman was unearthed at the Al-Assassif Necropolis on the west bank of the Nile at Luxor this week by a Spanish mission from the Institute of Ancient Egyptian Studies in collaboration with an Egyptian mission from the Ministry of Antiquities in Cairo, one of many archaeological discoveries made this week.

The discovery was made by chance during cleaning works in the open courtyard of the tomb of the 22nd Dynasty vizier Amenhotep-Hwi (TT28), when the mission stumbled upon a niche carved in the tomb's bedrock. The niche was locked with limestone slabs which led to a burial shaft containing the sarcophagus of a 22nd Dynasty Amun-Re priest named Ankh-If-Khonsu.

The head of ancient Egyptian antiquities at the ministry Mahmoud Afifi said that the sarcophagus was in a very good state of preservation and was carved in the distinct style of the 22nd Dynasty in wood covered in a layer of plaster. The sarcophagus depicts the facial features of the deceased wearing a wig and a crown of flowers. His chest is decorated with a necklace and he is holding papyri flowers.

The sarcophagus is decorated with hieroglyphic texts and scenes depicting the deceased in different positions before the deities Osiris, Nefertem, Anubis and Hathor. The mummy of the deceased wrapped in linen and holding flowers in his hands was found inside the sarcophagus but has not yet been studied.

The sarcophagus is now being restored, and the shaft is being investigated in an attempt to uncover more of Khonsu's funerary collection.

Meanwhile at Tel Al-Dabaa in the Sharqiyya governorate in the Delta an Austrian mission unearthed a 500-metre Middle Kingdom sandstone wall this week which could highlight the history of the Hyksos capital Avaris.

Minister of Antiquities Mamdouh Eldamaty described the discovery as "very important" because it highlighted the Second Intermediate Period in Egypt's ancient history and the Hyksos invasion that is considered a crucial era for ancient Egypt. Tel Al-Dabaa, Avaris in ancient times, was once Egypt's capital, and it has not yet been explored and studied because most of the ancient ruins are hidden under agricultural land.

Afifi said that the location of the newly discovered wall suggested that it once enclosed a port because it stretches along a depression that is very deep on the eastern side. He suggested that the wall could be related to a town that once controlled all the entrances to the depression and the provinces located on the western side of the wall.

Also this week, Eldamaty and the governor of Giza and Egyptian actors, businessman and tourist guides stood hand-in-hand for two hours around the Great Pyramid of Khufu on the Giza Plateau outside Cairo in support of the #Unite4Heritage Campaign launched by UNESCO last year to safeguard cultural heritage and diversity around the world.

Among the people who participated in the event was well-known actress Leila Elwi who two weeks ago became an envoy of the campaign. The event was organised by the ministries of defence, social services, youth and sports as well as of education and higher education.

Later in the day, Egyptian traveller Sherif Lotfi toured the Giza Plateau on a motorbike carrying the Egyptian flag in his hands and announcing the start of a new motorbike trip to the United States. Lotfi has previously travelled through countries including Austria, the Czech Republic, Poland, Belarus, Russia, Kazakhstan, Mongolia and Japan.

Last year, he biked from the foot of the Giza Pyramids to Switzerland and Tokyo carrying the Egyptian flag in an attempt to promote tourism and break a record in the Guinness Book of Records, spreading a message of peace and the love of nature throughout his travels.

Overlooking the plateau, workers wearing yellow helmets were busy transporting the gigantic colossus of Amenhotep III which had just arrived from Luxor. Six years after its discovery on Luxor's west bank, the statue of the New Kingdom pharaoh has now been transported to the Grand Egyptian Museum (GEM).

The colossus was unearthed in the Kom Al-Hittan area on the west bank at Luxor where the ruins of Amenhotep III's funerary temple stand. It was packed and transported to Cairo for restoration last week in order to be put on the planned grand staircase of the GEM.

Director-general of the GEM Tarek Tawfik told Al-Ahram Weekly that the statue was discovered within the ruins of the temple in 2009 by an Egyptian archaeological mission. It depicts Amenhotep III as the ancient Egyptian god Ra-Harakhti with a human body and a falcon head. The statue is partly damaged and has missing legs. Tawfik described it as "very distinguished" because it depicts the king as equal in size to the god.

"This is the biggest statue to be transported to the GEM after the transportation of the statue of Ramses II which was on display in Ramses Square in downtown Cairo," Tawfik said, adding that the colossus was now in the GEM's conservation lab where it would be restored and kept in storage until the opening of the GEM.

He said that the grand staircase of the GEM would put on show 100 artefacts that reflect kingship in ancient Egypt. Among these would be a granite column from Saqqara as well as other reliefs and architectural elements.

Director of restoration at the GEM Eissa Zidan told the Weekly that two black granite statues of the war deity Sekhmet were also to be transported from Luxor to Cairo. These statues were discovered in the ruins of Amenhotep III's temple on the west bank and were among the temple's decorative items. Both Sekhmet statues would be exhibited on the GEM's grand staircase, he said.

Zidan added that restoration work on the colossus had started immediately after its arrival from Luxor, when it was mounted and cleaned. A new mounting to hold the colossus would also be created, he said.

Also last week, Eldamaty opened Egypt's first airport museum in terminal three of Cairo International Airport as a way of promoting tourism and Egypt's history. Elham Salah, head of the museums section at the Antiquities Ministry, told the Weekly that the new museum included 38 artefacts carefully selected from different museums around Egypt, including the Egyptian Museum in Tahrir Square in Cairo, the Coptic Museum in Old Cairo and the Museum of Islamic Art in the Bab Al-Khalq area.

Salah said the airport museum was meant not only to attract travellers visiting Egypt, but also those transiting through the airport. She said that tickets would cost $3 for foreigners and LE25 for Egyptians.