Ugly Object of the Month – June


Ugly Object of the Month – June

This month's ugly object, a blown glass vessel from the Fayoum region of Egypt, wasn't meant to be ugly. If you look past its flaws, you'll notice the vessel's attractive shape and the carefully applied strand of glass that spirals around its neck. It actually could have been quite pretty, had not an unfortunate accident befallen it during manufacture. 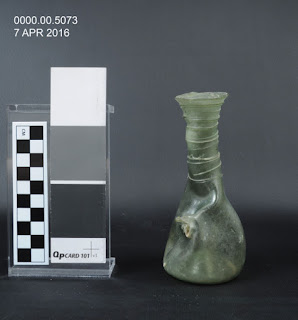 Glass vessel KM 5073, from the Fayoum

I can imagine the moment when it happened: the glassmaker had just transferred the vessel onto a pontil (the metal rod used to shape the glass) and was working on finishing the neck. Somewhere in the transfer, or in the process of wrapping the strand of glass around the neck, the glassmaker's sleeve or glove might have grazed the surface of the vessel, sticking to the soft, semi-molten glass and tugging it out of plane. The moment is captured in the twisted, pinched deformity that marks the vessel still. This vessel isn't alone – the Kelsey is home to a number of flawed glass vessels. Together they give an impression of the speed of manufacture that produced thousands of objects like these. A mistake or two would probably have been considered run-of-the-mill.

This vessel, and its flawed friends, will be featured in Carla Sinopoli's upcoming exhibition Less Than Perfect, opening at the Kelsey Museum on August 26. Be sure to pay them a visit!