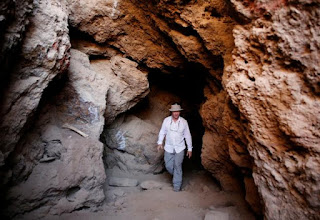 Geologist Leonard Karr walks out from an old mine in the Eastern Desert near the southern province of Luxor, Egypt May 20, 2016.
Reuters/Amr Abdallah Dalsh

Careering around Egypt's rocky Eastern Desert, Alexander Nubia (AAN.V) CEO Mark Campbell peers from his jeep and sees hills so rich with gold they could lure billions in investments and jumpstart the ailing economy. His company just has to find it.

Egypt's gold mining industry has for years been long on potential and short on investment -- the result of a jarring mismatch between spectacular geology and an unattractive commercial framework for mining.

Despite a history of gold mining that stretches back to the pharaohs, the industry is largely dormant. With just a single gold-producing mine, Centamin's (CEY.L) Sukari, the sector contributes a fraction of one percent to gross domestic product (GDP).

But last year, Egypt's government said it wanted mining to contribute upwards of 5 percent to GDP within 10 years.

This month it will launch its first bid round for new mining concessions since 2009, when a global gold-mining boom brought a handful of first-time investors to Egypt, despite what many of them say were poor commercial terms.

Most of these investors left after the 2011 uprising, driven away by rising political turmoil and falling global gold prices.

Now, armed with a 2014 mining law that helps streamline investment, Egypt wants to lure them back.

If successful, the industry could create jobs and attract foreign currency to an economy that is in dire need of both.

Paul Jones, CEO of Nuinsco, a Canadian explorer that left in 2011, likens Egypt's mineral-rich Nubian shield rock formation that straddles the Red Sea to the Canadian shield of a century ago, before it "developed the northern part of Quebec and Ontario with tens of millions of ounces of gold, and billions of pounds of copper, zinc, and lead."

"There are hundreds of good plays," he said.

That the allure of Egypt's geology has yet to spur a gold rush is down to regulation, investors and analysts say.

Despite the mineral-rich concessions on offer and the 2014 law, they predict a tepid response to this month's tender.

Rather than levy a modest royalty on mineral production and collect tax -- a system that helped Peru and Mexico launch their mining sectors -- Egypt offers investors a production-sharing agreement similar to its oil and gas deals.

Mining companies say the model does not fit their work. Unlike companies drilling wells, their capital costs can stretch for decades as they build out mines requiring hundreds of millions of dollars in investment.

They say production sharing, on top of a royalty payment, makes Egypt a prohibitively expensive play.

"Production sharing works for the oil and gas industry, however it does not work anywhere in the world for mining," said Centamin chairman Josef El-Raghy.

"As such, companies will not come and invest in Egypt despite the hugely prospective mineral resource area."

For Abdelaal Attia, an adviser to the Egyptian Mineral Resource Authority (EMRA), Egypt's commercial terms reflect the lower risk of exploration in a country where ancient mines populate the desert, indicating known areas of mineralization.

"You will not go to an area and start from scratch ... you know you have gold there. It's just about how much," said Attia.

"The tax and royalty system can be applied in countries that don't have any information about their lands ... but EMRA has a century of work, reports, and maps."

EMRA has yet to announce the commercial terms for this month's bid round, but Attia says it will likely stick to the production-sharing model and offer five to seven concessions.

Yousef Husseini, an analyst with EFG Hermes, said the data available is not enough to lure investors on the current terms.

"It's clear there is a lot of potential but investors want a more definitive answer. They want to know where minerals are and how much is present," he said.

BACK TO THE FUTURE

Alexander Nubia, just one of three active explorers in Egypt, is nonetheless bullish.

Campbell says a prospect his firm began exploring in 2011 will likely yield a commercially viable discovery next year. He plans to begin building Egypt's second mine there by 2019.

For Alexander Nubia, an exploration junior that takes on a multitude of high risk bets in hopes of occasionally striking it big, Egypt's mining history makes it a sound wager.

The work of past miners dots the hilly expanse of the company's concession -- a crumbling Roman fort and an abandoned 20th century British mine are not far from its own drill holes.

"There's about 6,000 years of mining history here and a large part of it was gold ... It offers almost a roadmap to the opportunities," said Campbell.