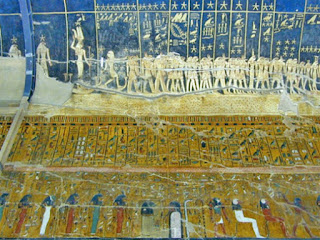 Seti I, son of Ramses I, was the chief of archers and a vizier. But before being a soldier and Pharaoh, he was a priest of Set, linked with Horus - the god of weapons, war, and the army.

During his rule (1305-1289 BC), Seti I advanced the extraction of gold from the mines, worried over the need to recover lost territories in Asia, and had to deal with a rebellion in Nubia - which he quickly suppressed. He has been considered one of the greatest pharaohs in Egyptian history, however Seti I is often outshined by the enormous fame of his son and successor, Ramses II.

Seti I’s tomb, KV17 of the Egyptian Valley of the Kings, was found in 1817 by the Italian archaeologist Giovanni Battista Belzoni. It is one of the most beautiful and complete tombs in the famous necropolis. In fact, it is the longest and deepest tomb not only in the Valley of the Kings, but in all the Theban necropolis - and even all over Egypt.

The tomb’s so complex that its exact length is uncertain, although it is assumed that it may be double the size of the currently known portion. Nonetheless, after three years of study, a team has managed to digitize the part of the tomb that experts have been able to bring to light so far. According to the information published by EfeFuturo, the digitization will allow the use of a facsimile to show the public the tomb while preserving the original.

About fifteen years ago, the Spanish company Factum Arte digitized their first wall of the tomb of Seti I, but when the team returned to the site in 2009 to continue work, the conditions of the burial (which were recently restored) did not allow them to continue, which led them to start the facsimile of the tomb of Tutankhamen instead.

But now that the Spanish team has completed the project related to the young pharaoh, they have resumed their work in the darkness and high temperatures that are surrounded by the colorful walls of Seti I’s tomb.

The mission will last for at least a year and aims to get an exact facsimile of this historic site, at a 1:1 scale in high resolution. Thus, the human eye will not notice any difference between the replica that can be visited, and the real royal tomb which will be available for archaeologists and scientists to study it more thoroughly - as is already being done with the tomb of Tutankhamen.

“This project to document the graves and make facsimiles serves the purpose of making the monuments visible to the public and helping in their preservation [...] We propose the use of a non-contact technology, in any case we are restaurateurs, but we document the graves in their current state,” explained the project manager, Carlos Bayod to EFE

The facsimile of Seti I’s tomb will be presented at the entrance of the Valley of the Kings, near the home of British Egyptologist Howard Carter and the replica of the tomb of Tutankhamen. Factum Arte is also restoring a house as a training center in three-dimensional scanning to transfer their knowledge and technology in situ on the ground where the research itself is established. 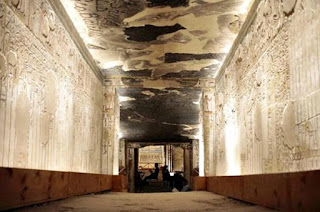 "The goal is to make replicas of tombs, and ideally for the project to be sustainable over time. Hopefully the people of Luxor will be able to take over the documentation and protection of these monuments soon" Carlos Bayod told EFE.

Finally, it is interesting to note that it was precisely the accuracy of the facsimile of the "boy king’s" tomb which allowed the British Egyptologist Nicholas Reeves to distinguish slits in the walls and announce his hypothesis about the possible presence of the chamber of Queen Nefertiti in Tutankhamen’s tomb.

Top Image: Photograph of one of the chamber walls of the sarcophagus of Seti I, where you can see hieroglyphics regarding the second hour of the Book of Amduat and the sky and its constellations. Source: Jean-Pierre Dalbéra/CC BY-SA 2.0

This article was first published in Spanish at http://www.ancient-origins.es and has been translated with permission.