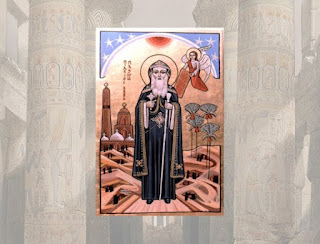 The city of Thebes was once a great center of pagan worship in Egypt, but began to fade in importance after the Incarnation. But from that declining city came St. Pachomius, who brought the glory of a new Christian way of life to the Church.

Here’s a simple question with no easy answer: Who founded monasticism?

Writing in these pages last year, John Goerke made a convincing case for St. Anthony the Abbot. However, St. Anthony founded only a certain kind of monasticism: the life of hermits (anchorites) known as “eremitism”. Though many of the lay faithful flocked to this great saint, these Egyptian monks lived separately, in tiny cells called lauras, with St. Anthony always trying to get further and further away from the world (and these followers). Indeed, St. Anthony left no rule, no monastery—nothing but an extreme example of a holy life beyond reproach which became legendary (literally) thanks to his biographer, St. Athanasius. But he did not leave a legacy of monasticism as we now know it—that is with an Abbot or Prior and a building one vowed to live in for the rest of one’s life.

If we qualify the above question, “Who founded Western Monasticism?” the answer is as easy as the question: St. Benedict of Nursia (480-547). And in the East the answer is almost as straightforward: St. Basil the Great (329-379). Both Sts. Benedict and Basil left written Rules that are still followed to this very day.

But both Benedict and Basil were building on an example that already existed: cenobitism. Indeed, St. Benedict begins Chapter One of his Rule with the acknowledgement that cenobites—monks “who are based in a monastery and fulfill their service of the Lord under a Rule and an abbot or abbess—are the “best” kind of monks (pace anchorites, sarabaites, and gyrovagues).

To find the “Father of Cenobitism”, or monasticism as it is still practiced in both the East and the West, we must turn to St. Pachomius (290-348)

Pachomius has more than a couple of strikes against him in terms of being a memorable figure like his predecessor, the great St. Anthony, and his successors, Sts. Benedict and Basil.

First, he lacks a reliable biographer. St. Anthony had the sublime Doctor of the Church, St. Athanasius, to pen his life. (One could hardly ask to do better.)

Second, Pachomius did not get along with the leading theologian of the day, Origen (185-254). Origen was more concerned with wedding Christian theology with Greek Philosophy—a quest that would finally find its fulfillment with the Angelic Doctor, St. Thomas Aquinas, a thousand years later—than with living an ascetic life in the stupefying Coptic desert. Actually, St. Pachomius hated Origen and declared that “anyone who read Origen’s work and accepted his ideas would be consigned to the depths of hell.”

That’s a micro-version of the third problem with St. Pachomius: he was simply a difficult person to get along with, period. His own brother, John, who joined him in the desert, came literally to blows over some trifle, and their fistfight had to be broken up by the other monks.

If St. Pachomius seems a strange character, part of it was because he was a true original. His Rule—and he was the first monk to draw one up—he claimed to have received from the angels themselves. The modern, or post-modern, layperson may scoff at such a position, but no one took it more seriously than Pachomius. “For Pachomius, religious obedience—which has no analogy with military obedience—was the highest law.” Pachomius had been a conscripted soldier years earlier into the Emperor’s army and it was the Christians who tended to the drafted soldiers’ needs that first gave him a hint of what benefit there was to this still new and somewhat odd monotheistic faith.

Once he was out of the army and had been baptized, he sought out a hermit in the desert named Palaemon, who had lived under the legendary St. Anthony. Prior to St. Pachomius’ Angelic Rule, this is how monks were “formed”: they attached themselves to some anchorite (who might just as soon shun them) to learn the eremitical life. Then they in turn went and lived as hermits in the desert themselves.

But having had the revelation of the angel (and sharing it with the aged Palaemon), St. Pachomius became a tremendous organizer, too. He seems to have been doubly blessed as both an ecstatic mystic and a nuts-and-bolts sergeant-major. (One is reminded of St. John of the Cross and St. Teresa of Avila, both mystics who reformed Carmelite monasteries many centuries later.) This may not seem like it means much to us now, but no one had so much as thought of it before, let alone carried it out: a group of men following a Rule, living in an abbey, under an abbot. While St. Anthony was certainly an “Abbot” in that he was the father of all monks who were scattered about the desert, St. Pachomius gathered together the monks who followed into orderly groups, and set about establishing monasteries as we still know them today.

None of this was at all easy. Though Pachomius drew many disciples, he also incurred the displeasure of his bishop. But having to answer to the bishop taught Pachomius that if his version of the Angelic Vision and Rule were to survive, he was going to have to get along with his local ordinary in particular, and with the clergy in general. Though none of his monks (including himself) were ordained, Pachomius requested that priests from the neighboring environs come and celebrate Mass for the monastic community. Here we see the beginning of the lay/clerical balance of the first monasteries.

What was lost in terms of the absolute solitude of the desert (à la St. Anthony the hermit) was gained in terms of a true monastic community. Make that communities, plural: Pachomius quickly had hundreds of monks on his hands and set about forming monasteries (abbeys) that we know today as groups of cenobites.

He lived long enough to meet with St. Athanasius about the year 333, to combat the Arian heresy, and to see his small groups grow into nine monasteries, three nunneries, and a total of three-thousand monks, all during his relatively short lifetime.