Caroline Berry, a conservation intern at Manchester studying Conservation Studies at Durham University, describes work on an important part of the collection.

'Soul Houses' on display in our Egyptian Worlds gallery

Manchester Museum's Egyptian Worlds Gallery has a great collection of objects which offer an insight into the ordinary and extraordinary of everyday life in Ancient Egypt, and sometimes if you look at objects from a different angle even more information into their story can be found. This is the record of one such event.

As part of this collection the Museum has a number of pottery 'Soul Houses' given by Sir William Matthew Flinders Petrie in 1907, which form the largest collection to come from one site, being the cemetery site of Rifeh in Middle Egypt. As part of my internship I have been fortunate to conserve four of these objects. 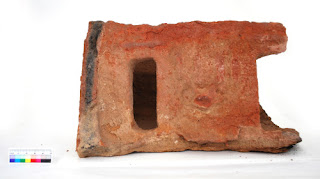 To speak quickly of the background of these objects, Petrie coined the term 'Soul Houses' to describe these objects.  He believed the pieces were used to provide provisions for the afterlife. He was uncertain whether these objects were to house the ba, the spirit of mobility of the deceased when it entered the land of the living or as an offering for ka, the spirit of sustenance, to use in the afterlife, hence the umbrella term 'Soul' to capture both eventualities.

Petrie used consecutive letters A to N to type these objects. 'A' was used for the objects he considered to be the earliest form and N the most modern. He used terms from contemporary architecture to aid this development. An example of each type was sent to Manchester by Petrie to form the type collection that we have here today.

The models are hand-built, probably assembled by pressing and pinching together rolled out flat slabs of clay to manipulate the form. The size of the objects and the uneven nature of the base may suggest the objects were made on a floor and fired institute. The quality of the fabric suggests firing would have been no higher than 900°C. Although there is no contextual evidence for production, it is likely that this happened within a domestic setting rather than the cemetery.

An important aspect of conservation is to build an in-depth record of each object treated. While undertaking the photography, a mat impression, which appears to be layers of grass or reeds tied into bundles, was found on the base of 4360 (below). 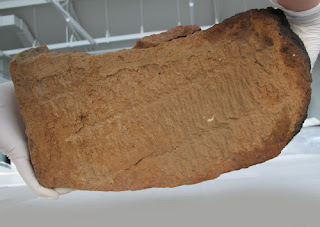 After checking the bases of the other Soul Houses from Rifeh, it was found that 4360 was the only object with this impression. Deciding to check the bases of the other ceramic offering trays held in the collection, 6544 from Sanam, Sudan (below) was the only other ceramic model to be found with a mat impression, although this impression is similar to an imprint of basketwork, as the example of contemporary basketry in the picture below suggests. (below) 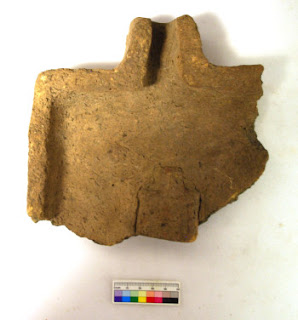 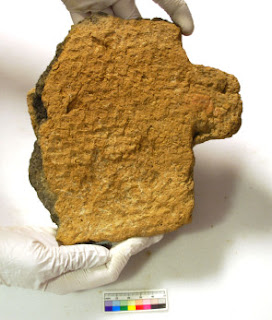 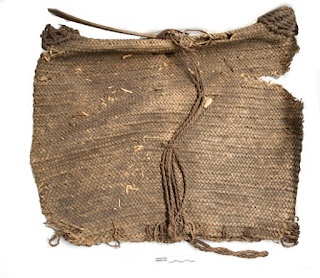 Here at Manchester we're are very excited by these findings and were hoping others may be able to share any such findings they have come across in Ancient Egyptian ceramics. We urge anyone with a soul house or offering tray, as long as the object is stable to do so, to check under the object and report back if they too have mat impression on their bases!