The Theft of History | The Argonaut Newspaper


The Theft of History 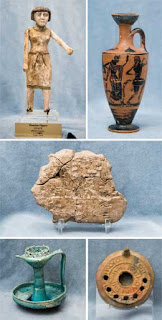 FROM TOP LEFT: LMU’s artifact collection includes an Egyptian burial figurine from 1750 BC, an ancient Greek vase, a Sumerian cuneiform fragment from 3,000 BC, an ancient Persian lamp, and
a rare terra cotta olive oil lamp from 4th-century Syria that reflects the influence of Arab, Jewish and Christian traditions.

Few places in the world have endured the carnage that Palmyra, Syria, has during its 5,000-year history. The ancient city’s towering gate and 375-columned colonnade have withstood massacres, marauders, an earthquake and centuries of sandstorms. Now the ruins of this former caravan trading hub are funding history’s richest terrorist organization: ISIS.

When I toured Palmyra on camelback early one dawn in 2008, I never dreamt that I’d be among the last Americans to see the UNESCO World Heritage site intact. I imagined Palmyra in its heyday, with adventurous, dusty and exhausted explorers and traders inching down the Great Colonnade, glad to finally reach this economic and intellectual oasis.

As a crossroads between the hungry buyers from the Roman Empire and the peddlers of spices, silks and other treasures from China, Persia and India, Palmyra was a melting pot of civilizations and ideas — from religious rites to political ideologies to cultural mores.

Now the village luxuries that once beckoned traders from Mesopotamia to the Mediterranean are archaeological treasures being illegally sold in order to adorn the coffee tables of private collectors.

During ISIS’ 10-month siege of Palmyra, which ended March 31, militants brutally beheaded the heritage site’s director of antiquities, 82-year-old Khaled al-Asaad, for refusing to reveal where valuable artifacts had been hidden for safekeeping.

Terrorists and tomb raiders also plundered approximately 20% of the archaeological site, according to Dr. Franklin Lamb, who during the past three years has traveled several times to Syria from his home in Beirut. He’s documented illegal excavations and looting in his new book “Syria’s Endangered Heritage: An International Responsibility to Protect and Preserve.”

“The museum, which I have visited twice, is another story. It’s pretty much gutted, and the loss is nearly complete of what remained when ISIS arrived,” Lamb writes in our email conversation. “ISIS used the museum as a ‘court,’ so it was always occupied, [which] increased the damage.”

ISIS earns up to $1 million each year from looting and trafficking antiquities, according to a congressional fact sheet issued by the House Committee on Foreign Affairs. It’s a mere pittance compared to the estimated $1 million per day from their black market oil dealings, but significant nonetheless.

Like a modern-day Silk Road, the trail of an artifact smuggled from the sands of Syria into the hands of a private collector may traverse three continents.

“The trade is underground and goes through all sorts of disguises,” says Dr. William Fulco, S.J., professor of archaeology at Loyola Marymount University and director of the school’s archaeology museum, which boasts one of America’s most unique “hands-on” antiquities collections.

Smugglers need to cleanse the origin of plundered artifacts so when they end up on the market, they won’t be known as coming from Palmyra, Fulco explains.

“For an archaeologist, the origin is its value. But the people who are buying want coffee table ornaments. That’s the big market,” he says. “I’ll bet at least 50% of the antiquities on the market, no matter where they are from, [the dealers] say they are from the ‘Jordan Valley’ or ‘Jericho.’”

Smugglers often funnel a stolen artifact through Dubai with phony claims of its origin.

“Dubai is one of the great clearinghouses. If you go on eBay, you’ll find a large number of dealers of antiquities in Dubai. But they don’t make as much money that way. If it’s a significant item, they want it to go Big Time, so from there it would typically go to Zurich — that’s a clearinghouse,” says Fulco. “[The item] would eventually end up in London or Paris or Los Angeles, which is a big center in antiquities. By the time it ends up in these markets through various agents, we’ve lost all track of the origin. All you know is it’s a beautiful, fun antique to have.”

Since Syria is unable to control stolen exports, emergency legislation was needed to establish illegality. Congress passed similar legislation during the Iraq War to prevent the importation of pilfered heritage treasures.

But will this legislation make a dent in ISIS’ illegal smuggling?

“Probably not much,” Fulco says.

“Something from ‘the Jordan Valley’ is shipped as a ‘ceramic pot,’ period,” he explains. “One dealer told me he shipped a wooden figure from Egypt that was about 5,000 years old and it was simply listed on the customs form as ‘doll.’ How many thousands of packages come from London to New York every day? There are planefuls of them! They’re not going to open every package. They’ll be going by the customs slip.

“What the FBI [cares about] is not the dealing in minor pieces. They’re concerned with masterpieces that cost hundreds of thousands or millions of dollars. They’re more concerned about where the money is going,” he says. “The money frequently goes back to where the antiquity came from — Dubai and then back to ISIS.”

That said, Fulco believes having the law is “a matter of principle.”

Also on principal, LMU’s Department of Classics and Archaeology currently refuses to purchase or accept gifts of artifacts from the Middle East due to the region’s instability.

“The more you buy from the market, the more you encourage people to rob archeological sites. We don’t want to be a party to that,” he says.

ISIS Erases History to Rewrite It

Is this wholesale plundering of significant cultural heritage sites unique in history, or just an extension of what’s been happening
for centuries?

“In Palmyra, they blew up two huge structures just to prove a point. They raided private collections and plundered the museum. It’s very clear ISIS wants to cleanse the Earth’s history and start afresh under their terms. To do that, they have to destroy history as it exists. There is a double motivation: remove all faces of history that do not correspond to their image and loot for financial reasons. These aren’t ideologically compatible, but that doesn’t stop them.”

Controversy has already begun about the restoration of Palmyra. Some experts are employing virtual imagery techniques using three-dimensional digital technology and robots to create models of Palmyra’s Roman arches.

“Given these sophisticated advancements in technology, why is it so critical to physically restore the ruins?” I ask both experts.

“Authenticity is a rather significant human desire,” Fulco responds. “Re-creation is re-creation, it’s not the site itself. They are not the artifacts that people [originally] created. You can go to Disneyland or Universal Studios where they reconstruct an entire city; they may look the same, but they are not the same. I can’t examine the way the artifact was fired. If it’s made out of brick, I want to know what that brick is, what its content is. Re-creating it or having pictures of it does not give you the evidence you need to research human development.”

“Digital imaging is a useful tool in helping restore damaged cultural sites such as Palmyra. But that is all it is, one tool,” Lamb emails from Beirut. “Anthropologists, sociologists and specialists from other branches of the humanities and social sciences recognize that cultural heritage is critical to supporting peoples’ identity. One of our deepest needs as humans is for a sense of identity and belonging, and a common denominator is our attachment to place and how we find meaning and identity in both cultural and natural landscapes.

“It is not that we have lost things that have stood as they were for [thousands of] years. What we have lost is the effort, the intellectual and labor effort, of generations of Syrian historians who lovingly restored [Palmyra’s] columns and stones.”

Kelly Hayes-Raitt, a Santa Monica resident, spent the summer of 2008 assisting Iraqi refugees in Damascus. She blogs at Living-LargeInLimbo.com.