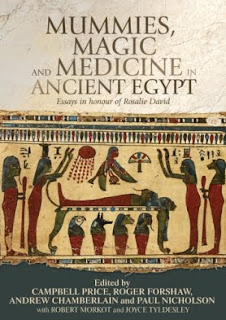 Prof Rosalie David OBE is the UK's first female Professor in Egyptology, and former Keeper of Egyptology at Manchester Museum, whose pioneering work at the University of Manchester on Egyptian mummies, magic and medicine has been of international importance.

The volume, published by Manchester University Press, celebrates Professor David's 70th birthday. It presents research by a number of leading experts in their fields: recent archaeological fieldwork, new research on Egyptian human remains and unpublished museum objects along with reassessments of ancient Egyptian texts concerned with healing and the study of technology through experimental archaeology. Papers try to answer some of Egyptology's enduring questions – How did Tutankhamun die? How were the Pyramids built? How were mummies made? – along with less well-known puzzles.

Rather than address these areas separately, the volume adopts the so-called 'Manchester method' instigated by Rosalie David and attempts to integrate perspectives from both traditional Egyptology and scientific analytical techniques. Much of this research has never appeared in print before, particularly that resulting from the Manchester Egyptian Mummy Project, set up at the Manchester Museum in the 1970s. The resulting overview gives a good history of the discipline, illustrating how Egyptology has developed over the last 40 years, and how many of the same big questions still remain. 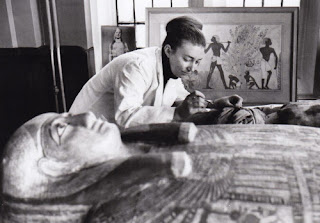 Rosalie David at Manchester Museum in 1974

Dr Campbell Price, Curator of Egypt and Sudan at Manchester Museum and senior editor of the book, said: "As the Museum's Keeper of Egyptology for 30 years, Rosalie David has inspired many people, old and young, and has brought the collection and her subject to the widest possible audience. This book celebrates her work and a proud Manchester Museum tradition."

The book, published in June 2016, is aimed at researchers and students of archaeology or related disciplines with an interest in multidisciplinary approaches to understanding life and death in ancient Egypt and Sudan.

Details, including Table of Contents, can be found at the Manchester University Press website: http://www.manchesteruniversitypress.co.uk/9781784992439/