Gilded gorilla, rhino and walrus skull sculptures to go on show in Norwich 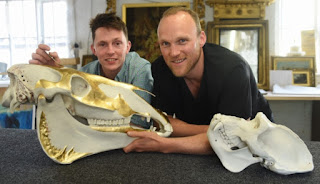 Artist James Webster, right, with a couple of the porcelain animal skulls he has created, a horse and a gorilla skull, which are being gilded by Tom Humphrey for an exhibition called Trophies at the Fairhurst Gallery. Picture: DENISE BRADLEY

A childhood fascination with Egyptology and animal skeletons sowed the seeds for a Norfolk artist’s stunning sculpture project. 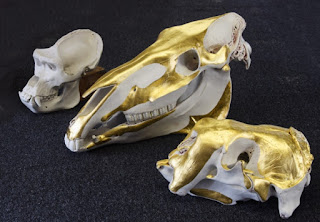 Three of the porcelain animal skulls created by artist James Webster which are being gilded by Tom Humphrey for an exhibition called Trophies at the Fairhurst Gallery. From left, a gorilla skull, a horse skull and a walrus skull. Picture: DENISE BRADLEY

Trophies, by James Webster, features a series of gilded, porcelain animal skulls, including a gorilla, rhino and walrus.

The 37-year-old, who grew up near Loddon, worked closely with the natural history museum in Paris, taxidermists and private collectors to gain access to animal skeletons to help him accurately craft his porcelain sculptures.

His finished collection of eight pieces will be displayed together in gold for the first time ever at Norwich’s Fairhurst Gallery, near to Franks Bar in Bedford Street.

Each hand-crafted sculpture is elevated on a concrete cube, with porcelain as a metaphor for the fragility of endangered animals. 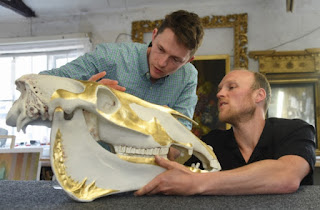 Artist James Webster, right, with one of the porcelain animal skulls he has created, a horse skull, which are being gilded by Tom Humphrey for an exhibition called Trophies at the Fairhurst Gallery. Picture: DENISE BRADLEY

“It’s also to remove the aspect of death, to make something that has never lived but to speak about its death through the fact it’s a skeleton, and to think about what we’re left with if they do disappear, like some species of rhino.”

Mr Webster completed his GCSE and A-level exams at the Norwich School, studied sculpture in Florence, travelled, then worked in London as a painter.

He worked as an art teacher at Diss High School before his latest project, which he has exhibited across Europe.

Growing up in the countryside, Mr Webster was interested in the environment in which he lived, and also in Egyptology.

He said he would collect animal skeletons and his grandfather, a retired doctor in Loddon, would help him make wooden shrines for them.

The eight porcelain sculptures - a tiger first, followed by a stag, stork, walrus, dolphin, rhino, gorilla and horse - are built by hand, with imperfections deliberately allowed to remain part of the finished piece.

“It’s been an evolution, and I believe it’s all meant to be,” he said.

His work has previously been sold to fine art galleries, and to a company owned by Damien Hirst.

The Nowrich exhibition will be the first time they have all been displayed together in gold, and they have been gilded by Tom Humphrey - the brother of TV presenter Jake Humphrey - who runs the Fairhurst Gallery.

He shone a light on the sculptures, with gold put in the areas where the light shone and the sculptures left plain in the shadows.

“It’s a different experience,” added Mr Webster. “The gold takes it to a different place - I think it brings something very futuristic to it.

He praised art dealer Jonathan Kugel for his help with the project.

Mr Webster’s next project will focus on the concept of martyrdom, and on terrorist group Isis.

The Trophies exhibition launches at the Fairhurst Gallery on June 25 and runs until September 23, coinciding with the Great British Art Show.