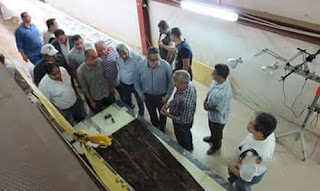 El-Enani inspect the work at the captain shrine

Restorers working on the second solar boat of King Khufu (26th century BC) stumbled upon the timbers of the boat captain’s shrine during restoration works.

Although the cedar beams were in poor condition, the team was able to successfully remove them from the pit where preliminary restoration work was being carried out.

The Khufu boats were discovered inside two pits in 1954 when Egyptian archaeologists Kamal El-Mallakh and Zaki Nour were carrying out routine cleaning on the southern side of the Great Pyramid of Giza.

Eissa Zidan, director-general of the GEM’s restoration department, told Ahram Online that Khufu’s boats had two shrines; one for the king located at the end of the boat and the other for the captain at the front.

Minister of Antiquities Khaled El-Enani told Ahram Online that the beams were cleaned and consolidated in an attempt to reduce the level of humidity.

The beams, he continued, will be transported to the labs of the Grand Egyptian Museum (GEM) for complete restoration.

Zidan said the team confirmed that the timbers belong to the boat captain’s shrine after comparing them with the one on the king’s first solar boat, now on display at Khufu’s Solar Boat Museum on the Giza Plateau.

The team solicited the help of experts specialised in boat construction in order to determine the purpose of every piece of the boat.

The shrine was documented and photographed with a 3D laser scanner.

Both boats will be put on display at the GEM.

Zidan explains after its initial discovery, the first boat was removed piece by piece under the supervision of restoration expert Ahmed Youssef, who spent more than 20 years restoring and reassembling the boat.

The second boat remained sealed in the neighbouring pit until 1987 when it was examined by the American National Geographic Society in association with the Egyptian Office for Historical Monuments.

In 2009, a Japanese scientific and archaeological team from Waseda University headed by Sakuji Yoshimura offered to remove the boat from the pit, restore and reassemble it and put it on show to the public.

The team cleaned the pit of insects and inserted a camera through a hole in the chamber’s limestone ceiling in order to examine the boat’s condition and determine appropriate methods of restoration. 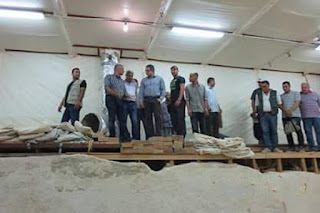 El-Enani inspect the work at the captain shrine