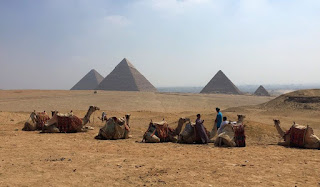 LUXOR, Egypt — Mummies might be the solution to this country’s tourism woes.

Foreign visits to the Arab world’s most populous country, long vital to Egypt’s economy, have declined by around half in the wake of two passenger flight crashes, one a confirmed instance of terrorism, according to government statistics.

But archaeological tourism is helping Luxor buck the trend in Egypt, where foreign visitors to the pyramids and Red Sea beaches contributed around 12 percent to the national economy in recent years.

Home of the Valley of the Kings and the Karnak Temple, the largest religious complex on the globe, Luxor is experiencing a boomlet compared with Cairo, home to the Sphinx and Great Pyramid, and the coastal resorts of Sharm el-Shiekh.

“The Japanese came back first with four direct flights a month from Osaka,” said Luxor International Airport General Manager Hesam Elhonsy. “The Germans were next with five direct flights a week. By October, both London Heathrow and Gatwick will have nonstop Luxor flights, and this is sure to boost the number of visitors coming from the USA.”

Luxor’s success illustrates how, despite unrest in the Middle East and a series of airline disasters, they are confident of a slow but gradual return of tourism in Egypt.

More than 14.7 million tourists visited Egypt in 2010. The number dropped to 9.8 million in 2011 as political instability followed the ouster of longtime President Hosni Mubarak.

Egyptian officials announced last month a multipronged effort to attract 12 million tourists by the end of next year, the Reuters news agency reported.

Investigators are still working to determine why a Paris-to-Cairo flight plunged into the Mediterranean Sea in May. The Islamic State took credit for downing a Russian airliner late last year after it left from the seaside resort of Sharm el-Sheikh for St. Petersburg. The suspension of Russian flights to Egypt’s Red Sea resorts has been a major blow to Egyptian tourism, according to the Central Agency for Public Mobilization and Statistics.

Tourists might be wary now, said officials, but nowhere else can they witness the treasures of Egyptian history and new discoveries will help revive their interest. That, in turn, would help Sharm el-Shiekh tempt Russians and Northern Europeans to return to the country’s inexpensive beach vacations in a desert clime.

“The opening of new archaeological sites like these will reignite tourism,” Antiquities Minister Khaled el-Anani said as he inaugurated four New Kingdom tombs in Luxor previously closed to the public. “When we dedicate the new Grand Egyptian Museum at the pyramids in Giza, we will see a rebound in Cairo, too.”

Last month, President Abdel Fattah el-Sissi designated the museum a “priority project” for the recovery of Egypt’s economy and ordered the Armed Forces Engineering Authority to speed up its completion.

“New technology is being used to re-explore the Valley of the Kings. It doesn’t matter if Queen Nefertiti turns out to be buried inside King Tut’s tomb or not,” said Ahmed Moussa, a veteran diplomat who now works for the Egyptian Ministry of Information’s Luxor office. “People are fascinated by it. The National Geographic Channel and Japanese TV create a desire to visit Egypt that a paid advertising campaign can never deliver.”

The tourism crisis also has been an opportunity, said Ramadan Haggagi, owner of the Viking Princess, a five-star Nile cruise ship. “This recovery is going to take time, and we are having to rethink our business and improve our facilities,” he said.

Only 120 of the 286 fabled floating hotels plying the river between Luxor and Aswan received bookings during the winter high season last year.

With the decline in direct flights to Luxor, Mr. Haggagi started offering more cruises starting at docks in Cairo, about 300 miles to the north. “I also reconfigured the itinerary to include Christian religious sites as well as the pharaonic treasures,” he said.

The Gospel of Matthew relates an account of a journey by Mary, Joseph and infant Jesus from Bethlehem to the Nile Valley, a narrative set out in more detail in the traditions of Egypt’s Coptic Church.

“The Nile floating hotels are the best way to see Egypt. The ancient monuments were built to be seen from the vantage point of the river,” said Mohamed Sayed Badr, governor of Luxor. “That’s why we are putting $3.5 million into upgrading these boats, making them more accessible for the senior citizens who come to visit us and developing a marina that meets the expectations of international travelers.”

The governorate’s police installed more than 100 closed-circuit TV cameras to monitor tourist safety, and a business development department began a program with local women to produce handcrafted textiles that are more likely to sell to discerning visitors than faux-pharaonic bric-a-brac.

“Yes, the Chinese are coming, but they hardly look at what we are selling,” said Mustafa Mahdi, a vendor who offers replicas of the ancient Egyptian deities, T-shirts and sunscreen in a shop abutting the Karnak Temple’s visitor center. “They even come with their own hats from home.”

Upper Egypt’s recovery is mostly at the upscale end of the tourism market, said Rafik Kairallah, general manger of the Sofitel chain’s luxury Old Cataract Hotel in Aswan and the Winter Palace in Luxor.

“We are exceeding projections for bookings already. It’s the best we’ve seen since the revolution. When we run cumulative numbers, we will see a positive revenue position by the end of June,” Mr. Kairallah said.

December is peak season in Upper Egypt, and the Winter Palace, originally built by Thomas Cook in 1886, achieved a 60 percent occupancy rate last year despite the downing of the Russian jet.

Luxor is hosting the World Tourism Association’s global conference in October, and the Winter Palace has nearly double the bookings — almost 20 percent — than it did in the same month last year.

“Howard Carter, announced the discovery of King Tutankhamun’s tomb from the steps of this hotel in 1922,” said Mr. Kairallah. “I don’t think anyone who considers themselves an international traveler or explorer can take Egypt off their map.”