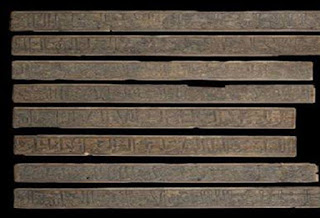 CAIRO: The Egyptian embassy in the UK received a set of wooden Islamic decorative pieces that were put up for sale at the London-based Bonhams auction house, the Antiquities Ministry announced in a statement Tuesday.

“Rectangular in shape and engraved with Quranic verses, the pieces were reportedly stolen from the Abbasid caliphs dome in the Al-Sayeda Nafisa area in Old Cairo and illegally smuggled out of the country amid the security lapse followed the 2011 uprising,” said Shaaban Abdel Gawad, the general supervisor of the ministry’s Restored Artifacts Department.

In 2013, the wooden beams were spotted displayed at the Bonhams website by the department which immediately notified the concerned authorities in the UK to stop the sale, said Abdel Gawad, adding that the artifacts in question will be sent back to Egypt soon.

The United Nation’s Convention on the Means of Prohibiting and Preventing the Illicit Import, Export and Transfer of Ownership of Cultural Property and other international laws were successfully referenced before the British authorities, said Abdel Gawad.
The department succeeded in retrieving a total of 441 artifacts in 2015, he added.

The dome has unique wooden and limestone engravings and was used as a burial place for Abbasid Caliphs during the 13th and 14th centuries, archaeologist Sherif el Sabban told The Cairo Post on Tuesday.

Egypt’s ancient sites have been targeted for thousands of years. The upheavals and the security lapse following the 2011 revolution have helped looters and tomb robbers target museums and several archaeological sites for treasures to sell on the black market.