Egypt Centre, Swansea: A head, a collector, leeches and dwarves

A head, a collector, leeches and dwarves 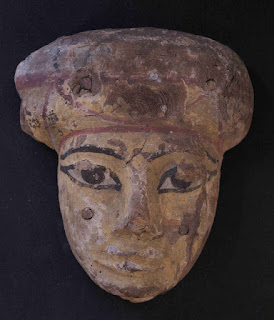 I photographed this object on Monday in advance of a talk, and have just found out a little bit more about it's history which I would like to share.

It is a head part from a Third Intermediate Period coffin (so around 3000 years old). It's made of wood and is around 24cm high. The wood is covered with plaster and then painted. The yellow colour suggests that this was from a woman's coffin, as women tended to be painted with yellow paint.

It has a label on the back showing that it was part of the Wellcome collection. Most of the objects in out museum are part of that collection, collected by Sir Henry Wellcome, the pharmacist. More about him here. But where did he get the object from.

Well apparently it was given to him in 1927 by someone who was well known as an Egyptologist, though had never been to Egypt, Warren R. Dawson. Warren Dawson (1888-1968), was encouraged by the curator of the British Museum, Wallis Budge, to study Egyptology. If you google his name, you will see he wrote various articles including the curiously titled Magician and Leech: A Study in the Beginnings of Medicine with Special Reference to Ancient Egypt, a paper on pygmies and dwarves and also material which he published with Grafton Elliot Smith, well known to students of the history of archaeology. Obviously a scholarly gentleman, who knew several other scholarly gentlemen, he was also interested in science and medicine.