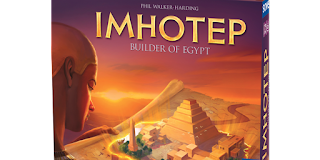 The strategic, ancient Egyptian-themed title joins the likes of Codenames and Pandemic Legacy in the running for the coveted award this year.

An Ancient Egypt-themed board game called Imhotep has been nominated for Spiel des Jahres, the much-coveted German award for tabletop gaming.

Launched to the UK by Thames and Kosmos earlier this year, the game is based on the historic architect of the Egyptian monuments, Imhotep, whose structures and recorded brutal tactics earned him notoriety among ancient Egyptians.

Developed by Kosmos games, the title challenges players to build the most revered monuments the Egyptians have ever seen to be crowned the greatest architect of all time.

Each player must arrange their building blocks in the right place, in the correct sequence and at the right time, while thwarting their opponents to earn points.

Released earlier this year, the game has already proved a popular title for Kosmos and its UK distributors, Thames and Kosmos and joins the likes of Codenames, Karuba and Pandemic Legacy: Season One in the running for this year’s Spiel des Jahres accolade.

The winner will be decided by a panel of German game critics in what is widely recognised as the most prestigious award for board and card games.

Thames and Kosmos will be exhibiting Imhotep at this year’s UK Games Expo, taking place at Birmingham’s NEC from June 3rd to 5th.