BOARD GAME OF THE MONTH: VOICE OF THE MUMMY

GAME OF THE MONTH

Each Month, I will try to highlight a particularly neat game, and provide as many photos, and as much info, as I can.

VOICE OF THE MUMMY 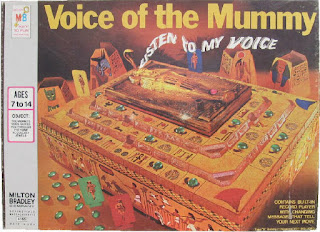 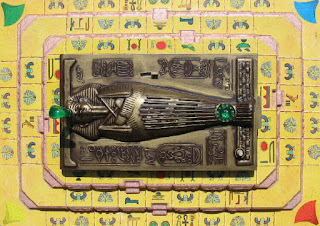 I had this game when I was a kid, and I still remember the fun I had playing it. It's got to be one of the most elaborate games ever put out by Milton Bradley, from the styrofoam temple base to the Mummy's sarcophagus... Look at the detail on the Mummy's face... First rate all the way! 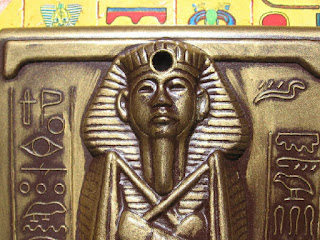 Every element of the game box was used in preparation of the game (how many games can you say THAT about?)... The inside walls of the box were beautiful Egyptian tomb paintings, so the temple top looked good resting inside the box. Then, when you turned the box bottom over, it became the base of the temple, and there were full-color hieroglyphic paintings on it as well!

The object of the game is to collect the most jewels. "Explorers" venture forth from their temple and attempt to collect any of the 26 jewels. In addition, there is a "Great Jewel" and a "Cobra", which carries with it an evil spell. Whomever has the Great Jewel at the end of the game gets an extra 5 points, but whoever has the Cobra loses 5 points!

The 4 "Explorers" are a hardy looking bunch (with the male explorers looking a little like the bearded G.I. Joe doll that was introduced by Hasbro the previous year). I remember having a crisis every time I had to pick my explorer... Green was (and is) my favorite color, but the green explorer was a girl! I can't have a girl explorer, can I? I don't remember how I resolved it, but I think I mostly picked a different color each time. 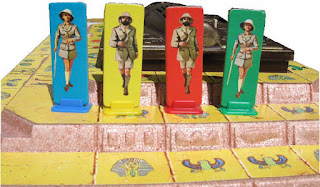 The "Temples" are made of heavy cardboard, with richly illustrated hieroglyphics and larger representations of Horus, the Sphinx, Bast, and Anubis. You can definitely hear your jewels "clink" when you drop one into them, and so can your opponents... 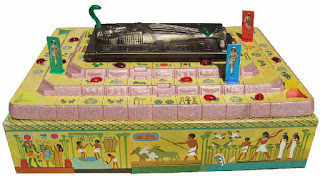 So, you've placed the jewels on the "Precious Jewel" spaces, and your explorers are in their "Temples" in their respective corners... Now, determined by the roll of a dice, you go around picking up as many jewels as you can by landing by exact count on a Precious Jewel space. If you land at the base of a step, you can go up one level of the Pyramid. Oh, by the way... did I mention that the Mummy speaks? 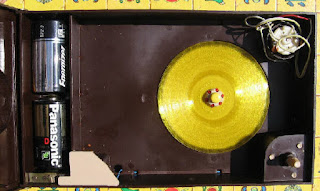 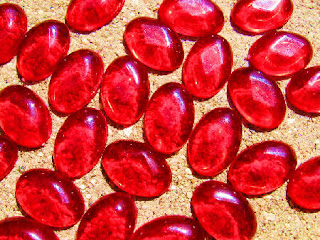 There is a record player inside the Mummy sarcophagus that plays randomly when the lever is pressed. When you land on a "Mummy's Head" space, you must press the lever on the Mummy's tomb, listen to his message, and "do as the Mummy commands". In the first half of the game (side one of the record), as players are collecting jewels, the Mummy will generally tell you good news, i.e., "Listen! The Great God RA stirs the wind into a sandstorm! Save yourself! Take a jewel...", or "Look out! The unholy snakes of Amon reach from below... Move up one level"...But once you reach the "Great Jewel" space by exact count (and take the Great Jewel AND the Cobra), the record is flipped, and players try to end the game by fleeing back to their temples. At this point, as is usually the case when Great Jewels are stolen from Mummies, the Mummy's messages are not too happy, such as: "You thoughtlessly drank from Pharaoh's poisoned well...You receive the spell" or "The Sultan of Kamir has captured you...As ransom, give one jewel to every opponent on your level". 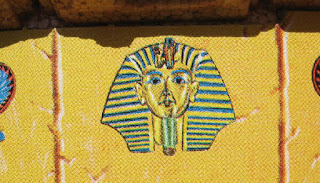 As everyone's running around trying to get back to their temple (and avoid having a conversation with the Mummy), they can steal jewels from one another as well as take or receive the Great Jewel or Cobra, by landing on each other's spaces by exact count. The fortunes of the game can turn quickly at this point, and the player with the most jewels at the end of the first part of the game will not neccessarily be the winner. 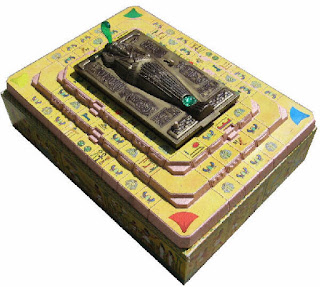 VOICE OF THE MUMMY is VERY popular, and difficult to find at a decent price. When I was first buying them, they were relatively cheap, but now they go for hundreds of dollars! There are several things you have to look out for when buying this game... MAKE SURE IT HAS A NEEDLE for the record player. I haven't been able to figure out how to get one to work with a substitute needle yet, so it's better just find a set that has one. Make sure the motor in the record player is working... If not, it IS possible to get it to work, but it takes a little effort. Sometimes the record player drive belt has deteriorated, causing it to malfunction, but this can be replaced. There are variant colors of jewels, and I've seen both green and red jewels and Cobras. It seems pretty standard procedure for companies to mix up the colors when making mass quantities of parts. And although the jewels are crucial, they are easily replaceable at your local craft store.


I'm always amazed when I find people who remember this game. It seemed so obscure to me when I was a kid, that I couldn't imagine anyone else knowing of it. And, though far from common, I've met enough people who played it as kids to determine that it must have been popular. So popular, in fact, that a sequel was released by Milton Bradley the following year, called SEANCE. It used the same "record player in a box" device as VOICE OF THE MUMMY, only in this case, Rich Uncle Everett controls the action from beyond the grave by doling out his possessions to players, and then in the second part of the game, telling you their value. It was not popular, and because of this scarcity, is almost as expensive to purchase as VOICE OF THE MUMMY. 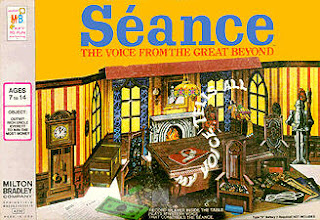 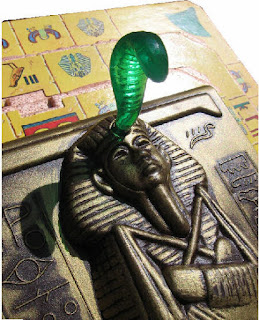 This game just seems like a labor of love for Milton Bradley... At a time when most games were simple TV based affairs, like THE PARTRIDGE FAMILY GAME and THE HAIR BEAR BUNCH GAME, or slightly interesting, like SUPER SPY, here comes a game that is superbly designed, from top to bottom...from game play, to the game implements. I can think of very few games that used the delivery material (the box INSIDE AND OUT) as part of the design, and part of the game. I love the sculpting of the sarcophagus, and the molding of the pyramid base. And I still do just listen to the different messages the Mummy delivers, with the scary background noises of screaming and wailing. It was quite a production for 1971!

Anyone I've ever introduced to this game has become an instant convert, and it's the most requested game when I have game nights. I loved it as a child, and I loved when I found it again the first time in my adulthood... It's my favorite, and I'm sure it will become your favorite too...

For further information, or to order, contact me through my "Questions?" link, or E-Mail me at Desis2@Juno.com