The Holy Family'S trip through Egypt should be a major Christian, Egyptian event: researcher 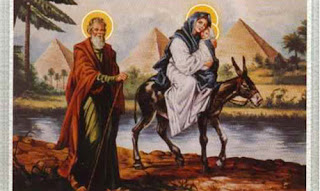 The patriarch of the Coptic church of Egypt Pope Tawdros, ministers of culture and immigration and the editor in chief of Al-Ahram celebrated Thursday the memory of the beginning of the journey of the Holy Family to Egypt at the old Cairo Church of Saints Sergius and Bachuss, better known as Abou Serga Church.

The traditionally sombre event was market by with statements about the significance of the flight of the Virgin Mary and baby Jesus to Egypt and the subsequently discussion the status of Copts in the history of Egypt.

According to the accounts of historians, the Holy Family spent around four years in Egypt. Their trip started in the Sinai at Al-Farma, on the border with Gaza, where they arrived after fleeing Jerusalem. Their trip ended in Durnaka, Assiut, venue of the famous Monastery where the feast of Virgin Mary is celebrated in August each year.

The sight of the Abu Serga Church is supposed to have been the spot where the Holy Family rested towards the end of its journey through Egypt.

This is precisely the reason it has been chosen for the annual celebration of one of the most eventful periods in the history of Christianity and Egypt.

“The journey of the Holy Family to Egypt is never properly celebrated – and here I am not talking about the religious side of it but I am particularly talking about the cultural and historic aspects,” said Robert Al-Faress, a researcher in Coptic history.

“Most people – and I mean by most people, Egyptians at large and not just Copts but Muslims too – would join the Moulids of Aladrah (Feast of Virgin Mary) in Assiut, not just because this was the last spot of the journey of the Holy Family,” Al-Faress said.

He then noted, “For the most part, Egyptians know that the Holy Family took refuge to Egypt from the tyranny of Herod, but that is about it”.

“This is part and parcel of the overall elimination of the Coptic history which is not featuring anywhere seriously in the collective Egyptian consciousness of the post-1952 Revolution – it is not in the history books and it is not in the media.”

He added that the few books and documentaries that had been produced on the Holy Family sojourns in Egypt are neither reprinted nor aired.

“This is because the trip is perceived as a Coptic rather than an Egyptian event – and this is such a pity; because had it been approached from a cultural side it could have prompted so many events and considerable tourism for the 22 spots where the Virgin Mary and baby Jesus had stopped,” he said.

Two years ago, the then minister of tourism Hesham Zaazouaa, following a visit with Pope Tawdros, promised to place the locations of the Holy Family's trip on the summer tourism itinerary. However, it never happened – partially because of the decline of tourism according to one source at the Ministry of Tourism.

“This might be part of the reason, but in fact, this promise had been made before and was never fulfilled – and the fact that it was made to the Coptic Patriarch is precisely the evidence to what I am saying: the matter is looked at as part of the Coptic history which is simply overlooked,” Al- Faress said.

He argued that for the most part the average non-Coptic Egyptian knows almost nothing about the history of Copts prior to the Arab Conquest of Egypt.

The lack of general knowledge also pertains to Christianity as a religion – “Copts know a great deal about Islam and Islamic feasts and fasts but not the other way round – this is because of education and media guidelines”.

This “almost deliberate marginalisaiton” of Coptic history “during the last 60 plus years”, Al-Faress said, "had been behind the launch of Sunday Schools where most Coptic families would take their children to learn about the history of Copts in Egypt.”

According to Al-Faress, this marked “the unfortunate beginning of the isolation of Copts and Coptic culture – so you would have an invisible line that separates a certain part of society from the rest”.

He added, “Inevitably, we ended up with a situation where ‘the other’, in this case the Christians of Egypt, are like a black box to the larger society; so many Muslims would assume things about Christianity as a religion and about the way Christians pray in their churches and live in their houses – and I am talking about the larger masses. Of course there are exceptions”.

With the second half of the ten-year rule of late President Anwar Sadat there was the rise of Saudi-style Islam in Egypt, where by the Christians were openly labeled in mosque preaches as the ‘infidels’.

In June 1981, Cairo saw one of the worst incidents of sectarian strife in the neighbourhood of Al-Zawyah Al-Hamra in the wake of what has later become a commonplace fight over the construction of a church between Muslim and Coptic neighbours.

The clashes left over 80 Copts dead and accentuated an escalated confrontation between Sadat and late Pope Shenouda that ended with the unprecedented isolation of the patriarch the Coptic Church in the monastery of Wadi Al-Natroun towards the end of Sadat’s rule in 1981.

“This marked the beginning of a very deep forced-isolation of Copts; it also marked the clinging of Copts to their Church and the influence that the Church exercised over Copts – far beyond the accepted spiritual domain,” Al-Faress suggested.

During the 1990s, the Coptic Church had been widely expanding its ‘civil’ influence of its followers, while the mushrooming Salafi influence was also expanding its grip of larger segments of Muslims who had been already bought into the Salafi-Wahabi school of Islam in the wake of their work migration to oil rich Gulf states, particularly Saudi Arabia, Al-Faress said.

According to Al-Faress, with such an atmosphere, it was out of the question that the history of the Holy Family's journey through Egypt would be remembered, and the very brief moment of hope for the end of this de facto religious and societal segregation that came with the 18 days of the January Revolution had fast dissipated.

“It was not about the one-year rule of the Muslim Brotherhood; far from it: it was about this battle of power that was exercised by the Church as by the radical Muslim clergy each on its community,” he argued.

Al-Faress argued that the attempt of ousted President Hosni Mubarak to appease Copts towards the end of his rule by marking Coptic Christmas as an official holiday, for obvious political gains that he was hoping for in favour of consolidating his over-stretching rule, had failed to be “smart enough to place the journey of the Holy Family in its due cultural context and to make the beginning of this trip as a national holiday."

He added that despite the attempt of President Abdel-Fattah El-Sisi to send reassuring signals to Copts in Egypt through the unprecedented participation of the president in the Coptic Christmas Mass, the journey of the Holy Family is kept in the cultural isolation.

“In Minya, every year, the Bishop of Malawi marks the trip by inviting a group of intellectuals and foreign diplomats to a Nile trip on traditional boats whose sail carry the drawings of the Holy Family to recreate part of the blessed journey where by the Virgin Mary, baby Jesus and Joseph moved by land and by the Nile. Not once was this event given any serious media coverage – if at all,” he said.

The only time where this trip was marked almost duly, Al-Faress recalled, was with the beginning of a new millennium in 2000.

Moreover, Al-Faress argued, the traditional popular accounts about the history of this blessed journey are fast falling from the collective memory.

“There is a village in Ashmonin where all Pharaonic temples are said to have disappeared when Jesus arrived in recognition of the holy presence; there is a street in Al-Mattariya where people would not try to bake bread because it would not ferment in recognition of the failure of Virgin Mary to find wheat to bake bread; and there is a plant in Moustorod that soothes skin illness and it is said to have been planted by the waters that the Virgin Mary used to bath baby Jesus,” Farres said.

He added, “Of course these could just be folk tales that are inspired by actual events – or maybe not, but then again they are just falling off our memory”.

“We have nothing to remind the public of the Holy Family's journey; there are pictures at churches and monasteries but those are for the church goers – as for the rest of the public there is only the two-hour event of Abou Serga Church that barely gets any coverage,” Al-Farres concluded.

In the book, History of the Coptic Nation, author Samy Saleh records that the Holy Family took the same route on their journey back to Palestine. They first descend to Al-Maadi, passing through Old Egypt, then followed the road to Ein Shams, back to the city of Mustorod, finally Al-Arish, and from there.