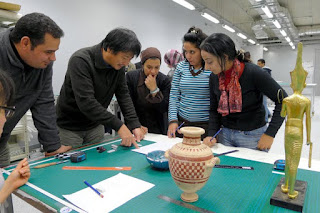 CAIRO--Terrorism, political uprisings and the crash of a flag carrier plane have devastated Egypt's tourism industry, but a plan is in motion to attract vacationers by unveiling a trove of treasures from Tutankhamun's tomb--with Japan's help.

The Egyptian government will bring out previously unseen artifacts from the ancient king's mausoleum it has kept in storage for almost a century. King Tutankhamun ruled ancient Egypt in 14th century B.C. The discovery of his undisturbed tomb in the Valley of the Kings, Luxor, by Egyptologist Howard Carter (1873-1939) in 1922 became one of the most significant finds of the 20th century, as the tomb held numerous funeral accessories that gave a detailed picture of how the pharaoh lived more than 3,000 years ago.

Nearly a century has passed since the discovery, and the lavish and archeologically important artifacts found with the young king are facing deterioration from a prolonged lack of adequate care. Recently, the Egyptian government turned to its Japanese counterparts for help ahead of the opening of the new Grand Egyptian Museum.

The Museum of Egyptian Antiquities in Cairo has been home to about 4,500 items from Tutankhamun's tomb--mostly daily-use garments such as gloves, head dresses, loincloths and sandals--but only about 1,700 items have been publicly displayed to date.

The reason for the rest of the collection's no-show is largely due to severe deterioration caused by contact with air and light, as well as careless conservation and ill-maintenance of the past. Such cases include irreversible damage to artifacts using incorrect adhesives and insect infestations.

Last autumn, a distressed Egyptian government requested the assistance of Japanese technicians to oversee conservation projects and to teach Egyptian conservators their world-class skills in caring for ancient cultural properties.

The collaborative project team set up a program in which Japanese specialists will be assigned to restore parts of the artifacts; then the Egyptian conservators will follow their examples and take over the restoration processes.

The Japanese International Cooperation Agency (JICA) will recruit experts within Japan, and send them to the Conservation Center, located adjacent to the under-construction Grand Egyptian Museum in Giza, as early as the beginning of 2017.

Plans are afoot to show the restored never-before-seen 2,800 artifacts at the exhibition halls of the new Grand Egyptian Museum, located near the famed pyramids of Giza, part of which is scheduled to open in the spring of 2018. Half of the initial budget for the construction cost of 70 billion yen ($686 million) is being covered by loans from Japan.

Egypt's Antiquities Ministry also intends to ask Japanese conservators to work on some of the most precious items from the hoard of King Tut's burial accessories, which have already been displayed in the Museum of Egyptian Antiquities but are in need of makeovers.

One such item planned for Japanese conservators to work on is a 2-meter long golden bed sculpted in the shape of an animal but has visible cracks on its legs. A two-wheeled chariot towed by horses is also in the frame for refurbishment.

Antiquities Minister Khaled El-Enany thinks the new display of never-before-seen items will be "a very important factor to attract tourists from all over the world." It will be Egypt's first time collaborating with a foreign team in a significant conservation project like this. He hopes this opportunity will help improve Egypt's technician skills base.

As the project will unseal some never opened artifacts since their discovery, Nicholas Reeves, a British Egyptologist, said the project may shed new light on the life of the young king, who died more than 3,000 years ago.

Long before this project started, Japan was helping Egyptians in the many specialized fields of archeological conservation. About 180 top Japanese experts from various institutions, including the National Museum of Ethnology, were sent through JICA programs as lecturers and teachers since 2008, and a total of 2,250 Egyptian conservators went through their workshops.

One such lecturer is Mie Ishii, a specialist in the conservation of dyed textile. In one workshop, she showed how a piece of old cloth can dissolve by washing it with water. By demonstrating many examples of failures, she showed how ancient treasures can be lost in a blink of an eye.

Experts from Nippon Express Co., one of the major international logistics companies based in Japan, coached the staff of the new museum on handling large and heavy items such as statues and sarcophaguses.

Hossam Rashed, in charge of moving heavy objects at the museum, said he now can do his job with confidence, even with stone statues weighing several tons, after undergoing crane operation training and a safety workshop provided by the company.