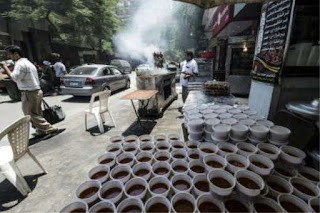 Cairo (AFP) - Pushing his cart through the teeming Egyptian capital, 71-year-old Cairo street sweeper Abdallah Mohamed says nothing can stop him from fasting during Ramadan.

Not the stifling heat pushing temperatures above 50 degrees Celsius (122 degrees Fahrenheit). Not even the long days of this year's Muslim fasting month, which is coinciding with the summer solstice.

More than a billion people around the world are marking Ramadan this month, when Muslim faithful abstain from eating and drinking from dawn to dusk.

Determined by the lunar hijri calendar, which has 11 days fewer than the solar Gregorian calendar, Ramadan shifts back every year. The last time the holy month began in early June was in 1983.

Mohamed wakes and eats around 3:00 am, before his daily two-hour commute from the southern town of Dahshur to Cairo, where he earns 25 Egyptian pounds ($2.80) a day cleaning the streets.

He works until around 2:00 pm, then heads home and sleeps for a few hours before breaking his fast once the sun sets.

Sixteen hours after he last ate or drank, Mohamed takes a sip of hot soup, then some food, tea and finally water.

"Many people are not able to fast. They did not get used to these things, to getting hungry," he says.

Across the street from where Mohamed is working, 37-year-old cook Fathy stands before a long grill with flaming charcoal, smoke billowing in his face as he turns cooking chickens.

During the days of Ramadan, Fathy packs his barbecued meat, rice, vegetables and salads to go, even for those who are not observing the fast.

"A customer tells me he will eat here? No," Fathy says. "Everyone here is fasting. The young kids are fasting."

Fathy's staff arrive at 8:30 am to begin preparing the food. They start grilling the meat around noon, around seven hours before the traditional evening meal to break the Ramadan fast, known as iftar.

When sundown comes, they must first tend to customers before taking their own meals.

"The most important thing is that there are tables here and people are breaking their fast," Fathy says.

Ramadan is a busy time for restaurant workers like Fathy, but for others the fasting month is quiet.

"During the daytime, workers reach their limit, unable to move after one or two hours of work," says 58-year-old Reda Mohammadeen, a manager at an auto repair shop.

"That is the maximum effort that they can muster."

But Mohammadeen says he doesn't mind as customers "themselves do not go out in Ramadan especially during the daytime... things are very quiet."

Pharmacist Mohamed Ibrahim says he has been busy this year however, with the long fasting days leading more people to seek medical assistance.

Many come to his shop in Cairo's Sayeda Zeinab district with low blood pressure, headaches and dizziness.

"Everyday I inject painkillers that do not break the fast to struggling customers of all ages," Ibrahim says.

Egyptians are not alone, with Muslims across the northern hemisphere having to cope with this year's long Ramadan hours.

"The heat is definitely intense this year, on top of the length of the fasting period which is over 16 hours," the 45-year-old Riyadh resident says as he heads to the mosque.

But Rayes says he hasn't altered his Ramadan routine.

"We have to deal with this weather and we can't change our daily obligations."

Nasr Abu Zaid, 25, worries about those having to toil outdoors, even though Saudi authorities have banned work in the sun between 10:00 am and 3:00 pm.

"Ramadan this year came at the height of summer and that makes it hard for many people. The most affected are those who work outside and in the construction industry; it's important to be kind to them."