This is what happens when Egyptian gods meet Roman York... (From York Press)


This is what happens when Egyptian gods meet Roman York... 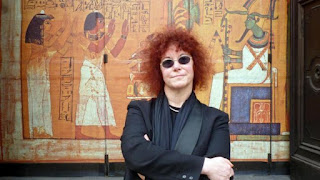 Joanne Fletcher, who will launch York's first Roman Festival ...with a talk about Egyptians in York

YOU might think it would be the Romans taking centre stage at the launch of York's new Roman Festival next week.

And so they will. But the person giving the opening talk is University of York academic Joanne Fletcher.

She just happens to be one of Britain's leading academics - she was presenter of the recent BBC2 series Immortal Egypt. And she's naturally found the perfect excuse to bring Egypt into things.

It just so happens that York boasts the most northerly ancient Egyptian temple anywhere in the world, she says. And, astonishingly, the remains of more than 60 Egyptian mummies have also been found in Roman-age burial plots in the city. Some are now kept at the Yorkshire Museum.

OK, so they weren't wrapped in linen: they were encased in gypsum instead, Prof Fletcher admits. But there was evidence of Egyptian embalming techniques. 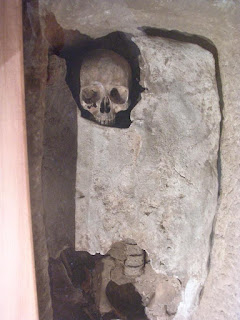 Gypsum mummies of the type found in York

These finds aren't new, exactly. The foundation stone for the Egyptian temple to Serapis - which was on the banks of the River Ouse, near where Toft Green now is - was actually found in 1770, and is now also in the Yorkshire Museum.

But the finds still give Prof Fletcher the perfect excuse to talk about her two favourite things - Egypt and Yorkshire.

"You can imagine how thrilled I was!" she says in her broad Barnsley accent.

The Temple of Serapis was put up by one Claudius Hieronymianus, legate of the 6th Legion, at least according to the Latin inscription on the foundation stone. "Some have claimed the name Hieronymianus suggests his own Egyptian origins," Prof Fletcher says.

The mummies, meanwhile, date from the third or fourth century AD, and are typical of similar mummies found in Roman cemeteries across the country.

But why is there so much evidence of Egyptian influences found in York? Would there have been Egyptians living here in Roman times, or would these have been locals who adopted Egyptian practices? 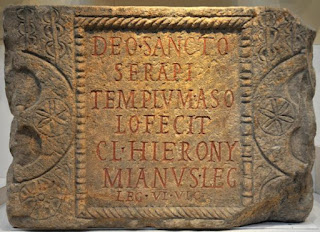 Foundation stone of the Temple of Serapis in York

There's actually nothing surprising about it, Prof Fletcher says. The Roman empire was hugely cosmopolitan. Egypt had effectively been absorbed into the empire since the death of Cleopatra. Leading Egyptian gods were worshipped in Rome, and as Roman armies invaded Britain and moved north to York they came north too.

The arrival of the Roman emperor Septimius Severus in Britain in 208 AD only strengthened York's Egyptian connections. Severus was from North Africa: and the officials he brought with him in his court included Libyans and Egyptians.

For a couple of years, until Severus' death in York in 211, Roman York - known as Eboracum - was effectively the centre of the Roman Empire: and so was itself a hugely cosmopolitan city.

Scientists are about to embark on more detailed analysis of the Egyptian mummies found in York.

So hopefully soon they will begin to yield up more of their secrets.

But if you can't wait, head to the Tempest Anderson Hall at 7pm on Wednesday (June 1), where Prof Fletcher will be glad to reveal more. Just don't go evoking any Egyptian spirits of the dead...

The Eboracum Roman Festival runs from June 1-5. To find out more, or book tickets, visit www.yorkshiremuseum.org.uk