‘This Institution Has Always Been Underfunded’: Anne Pasternak Offers Candid Thoughts On The Future Of The Brooklyn Museum | ARTnews


'This Institution Has Always Been Underfunded': Anne Pasternak Offers Candid Thoughts on the Future of the Brooklyn Museum 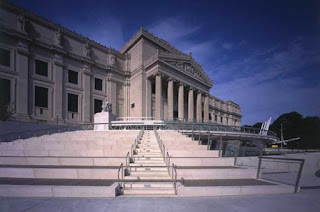 On Thursday, Anne Pasternak, the new director of the Brooklyn Museum, hosted a small group of journalists at a meeting in her office to discuss her plans for the institution. The carpeting in Pasternak's office is purple, there are chairs borrowed from the museum's collection, and the wall by the door is covered with a photo mural of the underside of the Brooklyn Bridge. The office has a balcony that looks out on Prospect Park. Pasternak was joined by Nancy Spector, the museum's new chief curator, and Kevin Stayton, its longtime deputy director. Art institutions are not generally known for their openness with the press, particularly regarding money, but all three spoke candidly about the challenges facing them as they map out the future of the museum. ("The other encyclopedic museum" in New York, as Stayton said at one point, in reference to the Met.)

"I think we're probably one of the most diverse museums not only in the city but also, by intention and design, in the country," Pasternak said. She added that she's setting out to disprove that "big institutions cannot be nimble.""Nimble" was a word she used repeatedly to describe her vision going forward. Pasternak hopes to make different use of the museum's collection—which includes extensive holdings in Egyptian antiquities, 19th-century painting, decorative arts, as well as some contemporary work, among other styles—and plans to do more in-house curating, with the museum hosting fewer traveling exhibitions. Pasternak took over the directorship in September from Arnold L. Lehman after about two decades as the president and artistic director of the nonprofit arts organization Creative Time. Lehman was a populist, a champion of street art, who once had the museum host an exhibition about Star Wars. This did not earn him much love from art critics, but he did create "an ethos of welcome," as Pasternak put it, somewhat awkwardly.Pasternak is also something of a crowd-pleaser. She is known for bringing contemporary art to unexpected locations across New York City, helping to introduce it to wider and different audiences. (Creative Time organized a much-beloved installation by Kara Walker at the former Domino Sugar factory in Williamsburg, as well as an elaborate performance by artist Nick Cave at Grand Central Terminal.) In her first few months at her new job, Pasternak has already shown herself to be unusually engaged with the community surrounding the institution. (Most museum directors in New York do not have a reputation for outreach beyond pandering to those with very deep pockets.) For instance, not long after starting as director, the museum came under fire for hosting a real-estate conference, angering local artists who believed this was a kind of gesture in support of gentrification. Pasternak invited protesters to speak at the conference, and in a new exhibition, called "Agitprop!," which features politically conscious artworks, Pasternak included pieces by Brooklyn-based artists that were critical of the museum.She is also overseeing a rehang of three of the museum's wings—European, Egyptian, and American. The new installation is already in progress, and Pasternak budgeted out just seven months for its completion. Such endeavors usually take years. "The fact that we're doing it in seven months is kind of crazy," she said.The meeting was followed with a tour of the new galleries, which are still in progress. In the European wing, the museum has put ten Rodin sculptures on view (there was only one previously) and arranged works into the sections "sacred" and "secular," also dividing the landscape paintings into two categories: "menacing" and "tranquil." The Egyptian wing makes a stronger point of looking at Egypt as an African nation. In a similar vein, the American wing has been rearranged chronologically and the number of artworks on display reduced by about 35 percent, with Central American, South American, and Native American art front and center."Who is American?" Pasternak asked the group in her office, before making a passing reference to several of the more xenophobic presidential candidates in this election cycle. "What does that mean in this day and age?" She added that the rehang is "making an argument for an inclusive exchange of ideas."But Pasternak was forthcoming about the museum's financial difficulties. "This institution has always been underfunded," she said, bluntly. (According to Pasternak, the institution's operating budget is about $36 million.) And so, a big question she has to face, she said, is: "How can a museum with incredibly modest acquisition funds begin to think about a collection?" Spector chimed in here to say that "the museum can be radically contemporary without owning contemporary art." Both stressed the importance of borrowing works, something that they claim should be easy because of the museum's history of loaning out pieces of its own. (Currently on view in the American wing is the Emancipation Proclamation, on loan for three months and one of 26 original copies known to exist.)Pasternak said that "buying everything" is an institutional practice that "should be interrogated." Such a practice belongs to "the museum of the past," Stayton said.