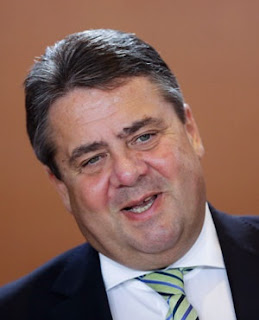 Cairo - German Vice-Chancellor Sigmar Gabriel said on Monday his country was worried by reports of mounting rights abuses in Egypt, telling reporters in Cairo that freedoms go along with economic development.

Gabriel also praised Egyptian President Abdel Fattah al-Sisi after a meeting on Sunday, saying at a press conference, "I think you have an impressive president", according to German media.

Germany and Egypt signed six economic agreements during his visit, said Gabriel, who is also economy minister, while raising concerns over human rights in Egypt.

"Reports of increasing human rights violations, cases such as that of the Italian citizen, worry us and cause us great concern and also damage the image of Egypt in its economic development," he said.

French President Francois Hollande, also in Cairo on a two-day visit, said on Sunday he brought up the case in a meeting with Sisi.

The Cambridge University PhD student disappeared in Cairo on January 25, and his body was found more than a week later bearing marks of torture.

Officials in Italy, which has recalled its ambassador from Cairo, have voiced suspicion that he was killed by security services, which Cairo denies.

His death has brought to focus what rights groups call regular abuses in Egypt after Sisi, a former army chief, overthrew his Islamist predecessor in 2013.

"I am of the firm conviction that the economic, social and internal political stability will increase when the democratic sections of Egyptian society can work freely and without interference from the state and can contribute to the development of the state," Gabriel said.

Germany, like France and Italy, view Egypt as a promising trading partner, and an ally in the fight against jihadists in the region.