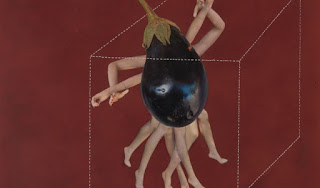 Perhaps best known for her found object sculptures that use objects from perfume bottles and bottles to critique gender stereotypes, the majority of the work in “Magnetic Bodies,” which comes to Dubai from Cairo, consists of photocollages, full of images that could only come from an artist like Lutfi, educated as a cultural feminist historian.In works like “Inside the Box,” 2015, a mixed media piece featuring a multi-limbed eggplant within a Francis Bacon-like cube, Lutfi combines the often hilarious feminist photocollaging of artists like Hannah Höch or Linder Sterling with a modern sensibility influenced by contemporary sexual politics and even emojis.

In addition to these works, the most prominent in the exhibition are the artist’s photocollage portrait of her hometown, Cairo. In this work, “The City Goes Pop,” 2015, the artist represents Cairo as she sees it, combining her own photography with images past and present from the city and its artistic heritage. The result are dense, layered portraits that provide a unique viewpoint of the Egyptian capital.

Although these images do connect to Lutfi’s past work, with images of mannequins continuing to appear in her work as they have over the past decade, a new drive towards documentary is prominent in the artist’s work since the Egyptian Revolution in 2011. Perhaps this was because the city (and the country in general) became itself more like a photocollage, with the history of the country being written or pasted over with a new history. Speculations aside, Lutfi’s work here provides the artist’s unique view of the city.