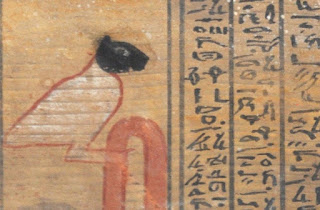 View Related Gallery »
The demon Ikenty represented as a large bird with a black feline head on a Middle Kingdom coffin. The same demon appears as a large bird on a much older leather roll.

A Belgium-based Egyptologist has discovered the oldest depictions of ancient Egyptian demons, showing that demonic entities populated the ancient Egyptians’ imaginations as far back as 4,000 years ago.
Presented recently at the International Conference on Ancient Egyptian Demonology at Swansea University, U.K., these demons gripped their victims and cut off their heads.

The third was portrayed in a 4,000-year-old leather roll the researcher had previously discovered in the shelves of the Egyptian museum in Cairo, where it was stored and forgotten for more than 70 years. It was the oldest and longest Egyptian leather manuscript.

“These three demons are already familiar to scholars from ancient texts. However, the depiction of two of them was unknown until now,” Sherbiny told Discovery News.

“The drawings show them in either a purely zoomorphic or anthropomorphic representation,” he added.

Two demons, called In-tep, pictured as a dog-like baboon, and Chery-benut, depicted as unspecified figure with human head, appear as guardians at the entrance of a complex building, possibly a kind of temple, that contains several chambers guarded by other demonic entities.

“The texts link this building to the moon god Thoth and the bark of the sun god,” Sherbiny said.

He noted that apart from their names, no accompanying textual elements refer to the tasks of these two demons.

“The name of the first demon, In-tep, may denote his dangerous role in severing heads as a punishment to any intruder of the sacred space,” Sherbiny said.

The third demon, Ikenty, was the guardian of a fiery gate that led to a restricted area concealing a divine image. The demon’s appearance was already known as it was portrayed on a Middle Kingdom coffin (1870-1830 BC) in the form of a large bird with a black feline head.

Sherbiny discovered the same demon in a slightly different, but highly intriguing form in the much older Cairo leather roll, basically finding the oldest image of Ikenty.

“The texts indicate that this demon has a swift attack with inescapably powerful grip on whomever he sees,” Sherbiny said.

The ancient Egyptian world of belief was inhabited by a huge number of entities with super powers. They could play both malevolent or benevolent roles, as threats, maladies and dangers, or as protectors, helpers and defenders.

“They turn up in variety of contexts that touch upon different spheres of human life and after life,” Sherbiny said.

In-tep, Chery-benut and Ikenty revealed that the elaborate and polychrome drawings of entities from the New Kingdom (about 3,500 years ago) onwards have much older roots than previously thought.

Sherbiny will publish the images of the demons in a forthcoming, extensive study which includes an integral analysis of the contexts in which the demons appear.

“Unfortunately little has survived, and the examples I discovered represent a rare opportunity to witness how the ancient Egyptians imagined the invisible,” Sherbiny said.