A panorama relating Egypt’s military history is to open soon on the banks of the New Suez Canal, reports Nevine El-Aref 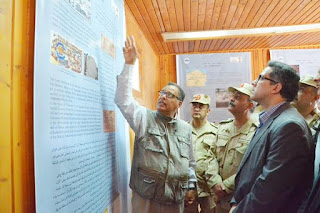 When President Abdel-Fattah Al-Sisi gave the go-ahead for the digging of a New Suez Canal last year, archaeologists applauded as their long-awaited project to develop and open to the public the Horus Road, a vital commercial and military link between Egypt and Asia in antiquity, was also planned to see the light.


Development work at archaeological sites on the Horus Road in the vicinity of the Old and New Suez Canal, especially those at Qantara East, to make them more tourist-friendly, began in parallel with the digging of the new waterway.


A site-management component is to be included in the development project. This will include a tourist route for visitors to enjoy the different architectural styles of the surrounding ruins, information panels, and a high-tech security and lighting system.


A visitor centre, bookstore, souvenir shop and cafeteria will also be built. Two buildings displaying a panorama of Egypt’s military history from the ancient Egyptian period to the modern era, similar to the October War Panorama in Nasr City in Cairo, are also planned for the area.


After a year’s restoration work on several ancient Egyptian and Graeco-Roman military fortresses in the area, work on building the panorama relating Egypt’s military history has begun in cooperation with the Ministry of Defence.


Earlier this week, during an inspection tour to Qantara East and West to inspect the latest work, Minister of Antiquities Khaled Al-Enany inaugurated a hall at the Qantara East Centre for Scientific Studies and Archaeological Research. The hall will serve as the centre of the panorama project.


Mohamed Abdel-Maqsoud, coordinator of archaeological sites at the New Suez Canal, told Al-Ahram Weekly that archaeologists and historians are expected meet on a daily basis at the site to prepare documents, photographs and scientific materials for the panorama, until construction of the building is completed in 12 months’ time.


The panorama is to be built in the empty space area between the Old and New Suez Canals. Al-Enany suggested that the building could be similar to the Museum of European and Mediterranean Civilisations (MUCEM) in Marseilles in France as both buildings overlook the sea.


The MUCEM is a 15,000-square-metre cube built of steel and surrounded by a latticework shell of reinforced concrete. Al-Enany described it as a distinguished building, adding that a similar building by the New Suez Canal would give an opportunity to vessels crossing the canal to admire the new panorama at night, in turn encouraging tourism.


A design has not yet been selected, but suggestions are welcome, he said. The panorama building, Abdel-Maqsoud told the Weekly, will not only include a display of Egypt’s military history, but will also have a research centre and a digital library of documentary films, manuscripts, books and photographs relating to Egypt’s military history.


The new museum will display artefacts unearthed in the fortresses located along the Horus Road, including weapons, pots, chariots and the statues of kings who led military campaigns to defend the country. Replicas of the military fortresses of Tharo and Tel Dafana will also be on display because they are the biggest ever found on the Horus Road, he said.


Abdel-Maqsoud said that the Tel Dafana fortress, built by the 26th-Dynasty king Psmatik I, and the Tharo (west and east) fortress found in 2003, are some 500 metres long and 250 metres wide and feature walls that were 13 metres thick with 12-metre entrances. The Tharo East fortress was once surrounded by a giant water-filled moat.


“This is the largest fortress yet found,” Abdel-Maqsoud told the Weekly. He said that the structure included 24 massive defence towers, 20 metres by four metres in size. Along with Tharo West, it was part of the eastern defences of the ancient Egyptian military town of Tharo and Egypt’s gateway to the Delta.


It was also the point where the ancient Egyptian army carried out military campaigns to secure the country’s borders. The graves of soldiers and horses have been found at the site “attesting to the reality of such battles,” Abdel-Maqsoud said.


Photographs of other fortresses are to be exhibited in the new panorama to show the development of the fortresses throughout Egypt’s history. Digital 3D photographs of military scenes engraved on ancient Egyptian temples are also to be on show.


Abdel-Maqsoud explained that reliefs of Seti I engraved on the north wall of the Hypostyle Hall at the Karnak Temple will be the main inscription on show. The reliefs, he continued, narrate Seti I’s campaign to smash rebel forces during the first year of his rule. Ramses II’s Kadish war relief, engraved on the Karnak Temple, will also be on show.


Abdel-Maqsoud said that the Habuwa fortress was a very important army station during the reigns of the New Kingdom pharaohs Ahmose, Seti I and Ramses II. It bore witness to the battles the ancient Egyptian kings led to expel the Hyksos out of the country, as well as their role in defending the country’s eastern gates.


Visitors will be able to continue their route towards the Tel Dafana site on the west bank of the canal to admire the fortresses built there by kings of the 26th Dynasty.


Egypt’s military history continues into Graeco-Roman times at Pelusium and in the Tel Abu Seifi area on the east bank of the canal. These areas include a military fortress, a Roman theatre and a complete settlement for soldiers with galleries. There is also an Islamic period fortress at the site.


During the ancient Egyptian period, Qantara East, at the beginning of the Horus Road, was the scene of several battles, among them those led by the pharaohs Ahmose I, in his war of liberation against the Hyksos; Seti I, in his military campaigns against rebels in Sinai and Canaan; and Ramses II, in his war against the Hittites.


In modern times, Qantara East saw battles between the allies and the Ottomans during World War I. It also served as the base of Australian operations in Sinai from 1916 until final demobilisation in 1920. It was the location for a World War I-era warehouse and hospital that were also used during World War II. The town was captured by Israel during the 1967 War, but won back after the 6 October War of 1973.


In peacetime, the city was an important trading post and one of Egypt’s busiest ports during the Graeco-Roman period, second only to Alexandria. Ships from the eastern Mediterranean and caravans from Syria and Palestine came to trade goods such as wine, oil and honey, which were transported to Egypt and the Red Sea by Nile barge and by road.


“The panorama project will add to people’s admiration for Egypt’s Armed Forces,” Abdel-Maqsoud told the Weekly, adding that it will also help support the belief that Egypt’s military is the oldest in the world.