"And it came to pass the selfsame day that the LORD did bring the children of Israel out of the land of Egypt by their hosts." Exodus 12:51 (The Israel Bible™) 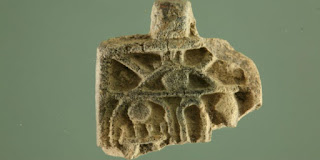 The 3,200 year old Egyptian amulet measures The small amulet is in the shape of a pendant, missing its bottom part, measures 21mm wide, 4 mm thick and its preserved length is 16 mm. A loop on top allowed it to be strung and hung on the neck. (Photo: City of David / Temple Mount Sifting Project / Israel Antiquities Authority)

Fours years ago, eight year old Neshama Spielman discovered a rare Egyptian amulet, estimated to be more than 3,200 years old. Only in the last week have archaeologists at last deciphered the intricate inscriptions on the historical artifact.

Written in ancient Egyptian hieroglyphics is the name Thutmose III, an Eighteenth Dynasty Pharaoh who ruled over Egypt from 1479-1425 BCE and is considered to be one of the most influential pharaohs in Egypt's New Kingdom. Nicknamed by historians the "Napoleon of Egypt" due to his active pursuit to conquer cities and expand Egyptian land, Thutmose III is credited with having transformed Egypt into an international superpower.

The small amulet was found among the rubble at the Temple Mount Sifting Project, an organization whose sole purpose is to sift through the debris that was illegally removed from the Temple Mount by the Islamic Waqf in 1999. Horrified by the lack of regard for the countless archaeological artifacts from all periods in Jerusalem's past, archaeologists Dr. Gabriel Barkay and Zachi Dvira established the Sifting Project in 2004 as a way to salvage history.

Since the project's inception, well over 170,000 people from all over the world have taken part in the sifting, "representing an unprecedented phenomenon in the realm of archaeological research," according to the City of David, the archaeological site of ancient Jerusalem in the pre-Babylonian exile era located today in the Old City of Jerusalem.

Asked how the Egyptian amulet could have reached so far as Jerusalem, Dr. Barkay told the City of David, "For more than 300 years, during the Late Bronze Age, Canaan and the city state of Jerusalem were under Egyptian dominion."

It was 12 year old Neshama Spielman who made the incredible find when she came with her family to take part in the Sifting Project. "While I was sifting, I came across a piece of pottery that was different from others I had seen, and I immediately thought that maybe I had found something special," she said in a press release.

Indeed she did find something truly special. While Egyptian scarabs bearing the Thutmose III's name have been discovered in Jerusalem, this marks the first time the Pharaoh's name has been found to adorn an amulet. "Objects bearing the name of Thutmose III continued to be produced in Egypt long after the time of his reign, reflecting the significance and lasting impression of this king," continued Dr. Barkay.

This Friday is the first night of Passover, a Jewish holiday commemorating the Israelite Exodus from Egypt, making the deciphering of the ancient Egyptian relic especially meaningful. "A discovery such as this is particularly symbolic at this time of year, with the Passover festival just a few days away, and represents greetings from the ancient past," Assaf Avraham, archaeologist and director of the Jerusalem Walls National Park from the Israel Nature and Parks Authority, said to the City of David.

"It's amazing to find something thousands of years old from ancient Egypt all the way here in Jerusalem! Celebrating Passover this year is going to be extra meaningful to me," Spielman concurred in a recent interview with the City of David after being told what the markings meant.

The Temple Mount Sifting Project is organized under the auspices of Bar-Ilan University with the support of the City of David Foundation and the Israel Nature and Parks Authority.