Dream Images of Egypt Easier to See than Ever

Dream Images of Egypt Easier to See than Ever 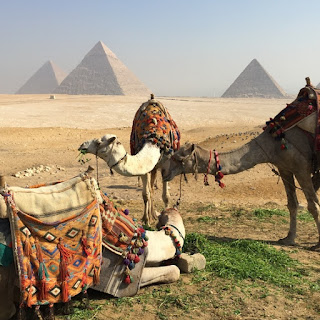 Few places conjure up such iconic and romantic images as Egypt. The pyramids, camels crossing the desert, felucca sailboats with their triangular sails gliding up the Nile, the ruins of Luxor and the haunting sound of the evening call to prayer as it echoes over the rooftops of Cairo. 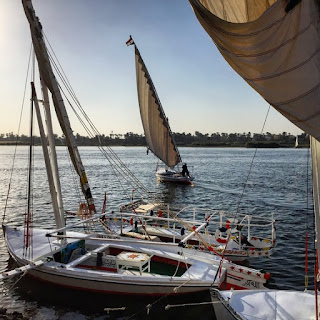 The amazing thing is how easily accessible - and inexpensive — all of these places are right now. Overpublicized reports of a few terrorist incidents have scared away many European and American travelers, but the truth is, Egypt is as safe as anywhere in the world. The Egyptian tourism industry employs 4 million people and the new government has made tourism safety one of their top priorities.

What does that mean? Well, there are small inconveniences. You’ll have to go through dozens of metal detectors. There are detectors at every hotel, museum, shopping center and attraction. Airports have as many as four detectors as you move from the physical entrance to the airport, to check in and on to your gate. There are armed police virtually everywhere a tourist would go. However, rather than being frightening, these measures are reassuring. Far more than most destinations, Egypt is going to extraordinary lengths to ensure safety. 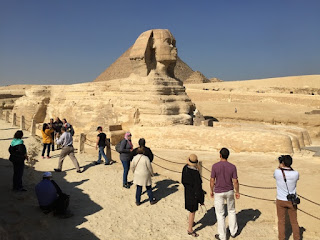 The romantic vision of Egypt has never been easier to see. And due to the political situation, it’s never been cheaper. Luxurious modern resorts, upscale hotels or historic inns that compare with any in the world for food and service can be found only minutes from 4,500-year-old antiquities.

Here are 10 dreams of Egypt that are easy to see and enjoy. 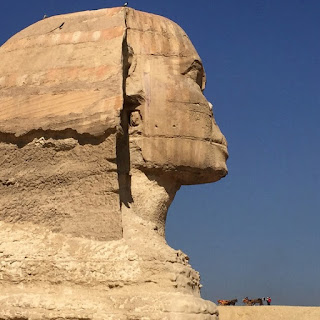 1. The Pyramids. Cairo suburbs have moved around the 4,500-year-old pyramids, and the approach by road can be disappointing. But continue to the highest viewpoint where you can see nothing but desert, camels and pyramids. This view is worth the trip alone. The site is about an hour from downtown Cairo hotels. 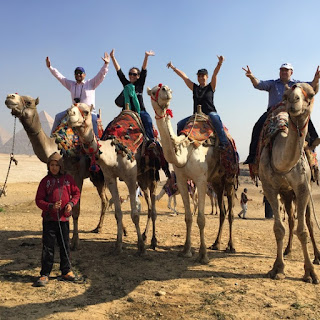 2. Ride a camel. You’ll have many opportunities throughout Egypt. Whether you do it for a ten minute photo op or for a lengthier ride, it’s a must. 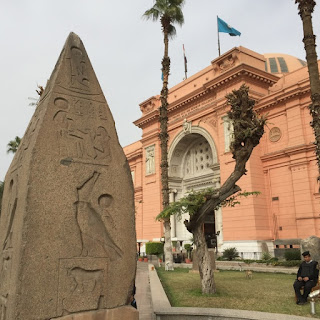 3. The Egyptian Museum. The museum sometimes gets a bad rap because it’s chaotic and crazy, with too many priceless objects crammed into every nook and cranny of space. The interior is old and musty with century old wood and glass cases that look like something from a Harry Potter or Mummy film. There’s a certain charm to that, but Egypt has recognized the problem and they are in the midst of building a new $1 billion (US) Egyptian Grand Museum, which will open at the pyramids in 2018. It will be the largest museum in the world devoted to one culture. All 4,500 items from King Tutankhamen’s tomb will be on display and a gigantic window will make the pyramids seem to actually be part of the museum. But there’s still something magical about the old museum in Cairo, which will stay open. For now, it’s the only place you can see the greatest relic of the ancient world, the solid gold death mask of Tutankhamen, which was placed in the museum by the very archeologist who found it, Howard Carter. Accept before you start that you can’t possibly see everything in the museum. But enjoy what you do see, and the museum is an easy walk from the Ritz Carlton or Four Seasons hotels. 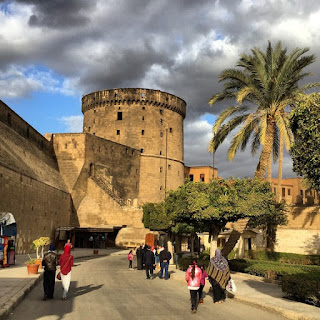 4. Walk the Citadel and Old Cairo. Just 30 minutes from downtown hotels lies the Cairo of imagination - shops filled with brass and antiques, chaotic narrow streets, old mosques, churches (yes, 10 percent of Cairo is Christian), and nearby, a towering 12th century fortress that was built to successfully keep the Crusaders out. Inside the citadel are mosques with alabaster walls, and the best view over the rooftops of Cairo. See if you can spot the pyramids in the distance. Time your visit to coincide with the Islamic Call to Prayer, at midday or in the middle of the afternoon. From this highpoint, you can hear the haunting cry echoing from dozens of mosques across the city. 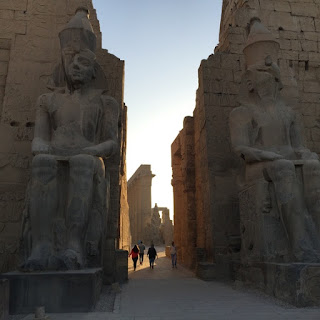 5. Luxor Temple at twilight. Luxor is an easy one hour flight from Cairo or can be reached by a 10 hour night train. A half dozen modern hotels line the banks of the Nile River, just a short walk (or better) short horse-drawn carriage ride from the Temple. Originally called Thebes, this was the center of power of the world for 1,500 years, and today Luxor is an outdoor museum, home to 80 percent of all Egyptian antiquities. Start your visit at the temple during the “magic hour” when the sun sets and the lights of the temple start to come on. 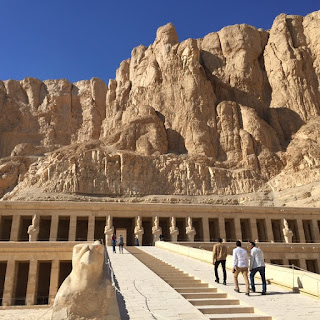 6. Visit the Valley of the King. Located, just 30 minutes from Luxor on the other side of the Nile, this is the one place you can’t take photos, but it’s easy to understand why. If you once started taking photos, you could never stop. There are 63 tombs of kings and nobles here. One of the last discovered, No. 62, is Tutankhamen. The boy king’s tomb is smaller and less impressive than some of the others, with fewer paintings and corridors...but it does have one amazing surprise. King Tut is still there! Or rather his mummy, which has never left. It is partially covered with a linen cloth and kept in a special climate controlled glass box. In the dim light, the airflow from the air conditioner in the glass box causes the linen cover over King Tut’s mummy to flutter up and down, as if he was breathing. It’s a hair-stand-on-end moment you won’t forget. For preservation purposes, only 150 people a day are allowed in the tomb, but that is not a problem today with the reduced tourism. Near the Valley, you can take all the photos you want at the simply amazing temple of Queen Hatshepsut. 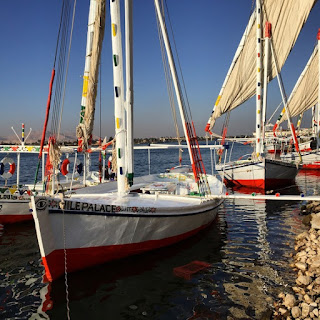 7. Ride a felucca on the Nile. The traditional wood sailing boats with their distinctive triangular lateen sails float effortless across the river, like some type of pretty water bug. All hotels have access to the boats. 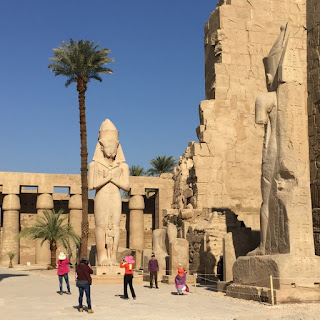 8. See Karnak Temple by day and then return for the thrilling sound and light show at night. It’s shown in English at different times on different days. This is the largest house of worship in the world. It is a history of Egypt captured in stone since each successive king over a 2,000-year period tried to outdo the others by leaving a new addition to the temple. Karnak Temple is connected to Luxor Temple by a two mile long road lined with statues. This connection is currently being reconstructed, but will require demolishing many buildings in Luxor so it will be some time before it is completed. 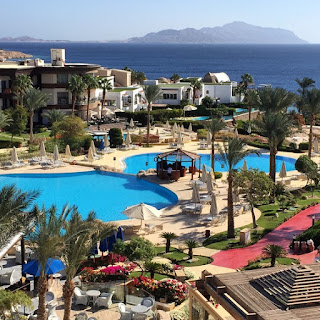 9. Visit a Red Sea resort. Sharm El Sheikh is the largest with diving, snorkeling, and submarines that take you to some of the world’s most beautiful coral reefs. The modern resorts are located in a sea of pink bougainvillea, and compare for luxury, cuisine, and style with any in the world. Within a few meters, you’ll see beautiful Russian tourists in thongs drinking beer on the beach, and Arab women bobbing in pools in a full head-to-foot black abaya gown, with a black niqab face veil covering everything but their eyes. Such is modern day Egypt. 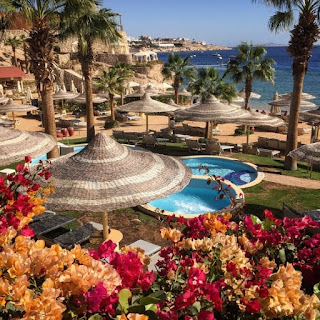 Following the tragic terrorist attack on a Russian passenger jets leaving Sharm, the city’s airport lost most of its flights and is currently being reclassified and restructured, so flights are restricted at the moment. Security at the airport was the highest we saw in all Egypt, and it should reopen fully in the near future. It’s a one hour flight from Cairo on Egyptian Air. With the reduced flights, the resort is nearly deserted and offers fantastic bargains. 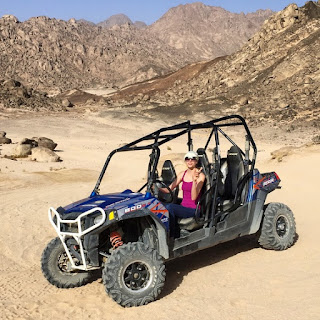 10. Venture out into the desert. The majority of Egypt’s 80 million people live on or near the Nile, but it is the other 5 percent who are perhaps most fascinating. The desert starts a 15 minute drive from Sharm el Sheik. On dune buggies, you can soon be lost in a maze of stark hills burned black by the sun. The close-in Bedouin villages have a bit of a tourist feel, but watching people herd camels the same way they have for centuries is an image that will stay with you for a long time.

IF YOU GO: The Four Seasons Nile Plaza and Four Seasons First Resident hotels in Cairo are both beautiful and luxurious with Nile views and are close to all attractions; the Fairmont Heliopolis Hotel is near Cairo airport and has 17 international dining choices, including the entertaining Egyptian Night, featuring belly dancing and authentic local cuisine.

The Steinberger Nile Palace in Luxor is directly on the Nile with balcony rooms overlooking the river, eight restaurants and bars and gorgeous riverside pools.

The Savoy Hotel in Sharm El Sheikh is a dream of flowers, pools, and outdoor cafes, all dropping down to a beautiful beach on the Gulf of Aqaba. It is walking distance to the dozens of shops, bars and entertainment of Soho Square. The Rixos is a Turkish chain that has brought incredible elegance to Sharm. The original hotel has seven pools, two main restaurants, eight A’la Carte restaurants, five bars, a spa, and its own protected reef accessible by a 147m pier, creating a natural aquarium. 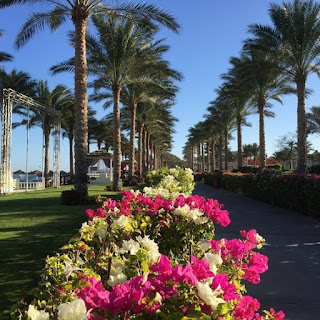