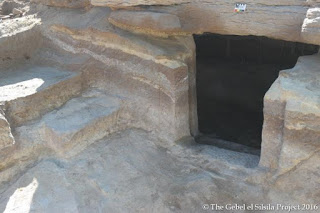 A 3,400-year-old cemetery has been discovered at an Egyptian site by a team including a Hereford archaeologist.

John Ward has been working on a Swedish project at Gebel el Silsila in Egypt since 2012 and during the spring season played his part in discovering an ancient necropolis.

They also found archaeological material, including funerary ware and beer jugs, dating from the early 18th dynasty and indications of re-use throughout the 19th dynasty.

Preliminary analysis of the bones suggests burials of men, women and children of all ages.

Mr Ward, who has family who still live in Hereford, said: "This new discovery is not only exciting in itself, it provides us with further information with regards the overall function of Silsila.

"For many years scholars have looked at Silsila as one of ancient Egypt's main sources for quarried sandstone, however, this discovery shows us that there was indeed a more substantial settlement at Silsila than previously thought, or known about."

They discovered rock cut tombs and a shrine, which they hope to explore when the return for the winter season.

Mr Ward added: "Silsila, again has revealed one of her hidden secrets, shedding light on its importance in the region as not only a quarry but a vibrant community on the Nubian border."

Mr Ward and his partner Maria Nilsson have just secured a two-year position at Minnesota University but will return to Egypt in October to continue their work on site at Gebel el Silsila.