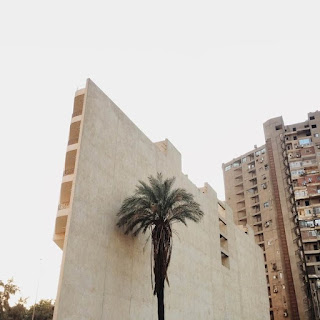 When Owise Abuzaid was studying at an arts college in Cairo, Egypt, he lost his camera during what he described as a “clash” in the street. The camera — a 550D canon, he remarks, acknowledging that it was a prized possession — was a gift from his mother, who noticed that he had a penchant for picture-taking. Before he received the gift, he’d borrowed his cousin’s, which he toted around for a photography course. A graphic design student, he saw photography as another medium for his minimalist approach to art.

“I was shooting abstract photographs,” Abuzaid said in an interview with The Huffington Post. But, “After the revolution, all young Egyptian guys moved to photojournalism to document what was happening in the streets.” Abuzaid jumped on board, then, shortly after getting his hands on a camera of his own, he lost it.

“When this happened, I got to use my iPhone,” Abuzaid said. Carrying around the portable device, he “discovered that [Cairo’s] streets are very rich and have so many elements and topics.”

In one of the photos on his Instagram feed — which has garnered nearly 100,000 followers — outdated electronic devices sit stacked in a neat pile in front of even older walls, flecked with peeling paint. In another, a pair snaps a selfie with a sweeping view of the old city in the background. Each of the images aims to capture the juxtaposition of old and new that can be found on each of the city’s streets, Abuzaid says.

“The contradictions are everywhere,” he explained. “They are visible and invisible. There are too many new buildings mixed with historical places, and too many illegal new buildings built in agricultural spaces.”

Although newer, Westernized developments are portrayed as cloying and excessive in some of Abuzaid’s pictures, he has warm feelings towards the progressiveness that comes with them.

“The city is getting more busy and crowded day after day. People are suffering for basic needs.” Yet, he added, “The most interesting thing is that there is a new hippie era among Egyptian youth as they become more open-minded.”