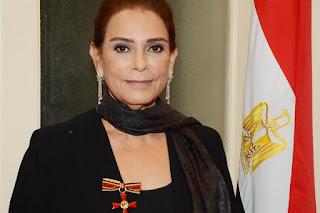 This article is a celebration of the life of an extraordinary woman, a woman who was a dynamo of energy, a passionate ambassador for her country, a lover of Germany, a dedicated career woman, a loyal friend and a loving wife and mother. This article is about Amani Ghanem.


Ghanem was born on 2 February 1948 in Cairo, where she attended the German School of the Borromeans in the district of Bab Al-Louk between 1954 and 1966. She studied German literature at Cairo University between 1967 and 1970. In the year after her graduation, she was employed by the German Archaeological Institute (DAI) as an interpreter and administrative clerk.


In only a very short time after her initial employment, Ghanem took on increasing responsibilities at the Institute that went beyond her regular duties. Her role as an intermediary between the Institute and the Egyptian authorities should be emphasised. With her unparalleled dedication and reliability, her profound expertise, her charming and respectful tenacity and her extraordinarily acute instincts, Ghanem guided and significantly determined the bilateral relationships of the Institute for a period of over 40 years.


The institute’s excellent relations with the Egyptian Ministry of Antiquities, vital to the Institute’s work, as well as with academic institutions throughout the country and the broader Egyptian authorities are all due to Ghanem’s unfailing commitment. Over the decades, she also intensively liaised between the Egyptian authorities and the ventures of German universities taking place in Egypt to such an extent that she made a fundamental contribution to the promotion of academic and scientific exchange between the two countries.


In addition to the academic sphere, Ghanem’s dedication on the cultural and political levels decisively contributed to the exceptional relationship between Egypt and Germany. It is thanks to her abilities as an intermediary and to her diplomatic skills that the fragments of the box of the gilded coffin of King Akhenaten (the coffin without the lid), an outstanding and historically significant ancient Egyptian object, was returned to Egypt.


The coffin, discovered at the beginning of the 20th century, had been lost for a long period and then resurfaced in the 1980s in Munich. In 2002, the box of the coffin was officially presented to the Egyptian Museum in Cairo after almost two decades of political and diplomatic negotiations. The return of the coffin box, which was accompanied by great public interest both in Germany and in Egypt, signified the end of a long affair that threatened to damage the reputation of the German Federal Republic in Egypt and beyond.


Ghanem was deeply involved in the organisation and implementation of the Cairo Institute’s centenary celebrations in 2007, which were a major success for all involved. Owing to her deep love for her home country, Egypt, and to her exceptionally close bond and loyalty to the German Archaeological Institute, Ghanem was deeply committed to intensifying the relationship between the German Federal Republic and Egypt, achieving this with great success. In recognition of her achievements, she was awarded the Order of Merit of the Federal Republic of Germany at the Institute’s premises on 9 March 2015.


Ghanem felt particularly close to German culture and always saw herself as a mediator between worlds. She was a patriotic Egyptian filled with the deepest love for her country and full of empathy for its people. In the framework of her duties she was also devoted to the promotion of Egyptian colleagues, whom she supported in word and deed, giving helpful counsel on the topic of study visits to Germany and various administrative questions as well as personal matters. She also advised German newcomers to the institute as well as established staff members on questions concerning Egypt’s culture and society.


Even after Ghanem had retired from her duties in 2013, she remained close to the DAI in Cairo. Her colleagues as well as guests of the Institute will always remember Amani Ghanem as a competent and helpful individual, but also as a particularly clever and warm-hearted woman who unwaveringly searched for diplomatic solutions even in the most difficult of circumstances.


In 1995, while she was still working at the DAI, Ghanem cofounded Trade Fairs International with media personality Osama Kamal. The company, which specialises in organising both domestic and international events, continues to be a success until this day.


Besides juggling two jobs, Ghanem was also a loving wife, an amazing mother to her two daughters, and a wonderful grandmother to her five grandchildren.


One would not expect such a woman to have time to spare for anything or anyone else, yet Ghanem continued to give freely of her time and energy. The core of her philosophy in life was that for every problem there is a solution, if one only dealt with it in a responsible and well-thought-out, yet empathetic and sensitive, manner. When asked for a favour she would always say “if it can be done, I will be the one to do it.”


She had a profound knowledge of human nature and a deep empathy and respect towards the people she dealt with, regardless of their origins or standings. With this positive attitude, she was able to overcome many seemingly unsolvable differences, to build bridges and open doors, and to handle and negotiate the most delicate of matters, while always maintaining her modesty, dignity, politeness, warmth of heart and affection towards the people around her.


Ghanem walked with ministers and professors, but she never lost the common touch. She constantly gave to the poor, and she was always there to advise and help people of lesser means. It is no coincidence that the walls of her office at the DAI were embellished with portrait photographs of Egyptian people, both men and women, of all ages and from cities and rural areas. When explaining her love for Egypt, she often pointed to these pictures.


Amani Moursi Ghanem unexpectedly passed away on 26 March, 2016, in hospital in Cairo, yet she will always be in the hearts of all those who loved her. In this age, when cultural differences too often form barriers between people, Ghanem’s memory will remain an example of how to build bridges.