Reattaching a mangled “ear” | In the Artifact Lab


http://www.penn.museum/sites/artifactlab/2016/04/19/reattaching-a-mangled-ear/
Reattaching a mangled "ear" | In the Artifact Lab

If you read our blogposts back in February and March about x-raying our animal mummies (see Animal Mummies: contents revealed part I and part II) you will see that the cat mummy we x-rayed actually has no cat remains inside the wrappings. Here is the image of the cat mummy and radiograph: 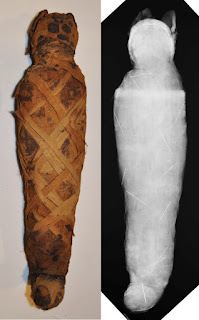 Just because there is no cat inside, it doesn't mean that we don't treat it just like any of our other animal mummies. (And it doesn't mean that these empty mummies were any less significant in ancient times either – check out this article which we've linked to in previous posts about the Manchester Museum and University of Manchester project which found that 1/3 of the 800 mummies they imaged have no remains inside.)

In the case of this cat mummy, it was in the lab for treatment so that it could be reinstalled in our Secrets and Science gallery. One of its major problems was that its right ear was mangled and partially detached.

Two views of the cat mummy's head, with red arrows pointing to the mangled ear

Repairing this area was slightly complicated because so much original material had been lost. I ended up flipping the cat mummy over and working on it from the back, and secured the ear using Japanese tissue paper toned with acrylic paint, adhered with 5% methylcellulose in deionized water.

This treatment worked well and will prevent further damage in that area in the future. 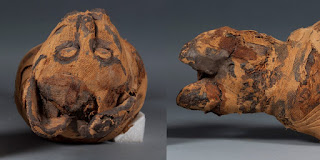 Two views of the cat mummy's head after treatment 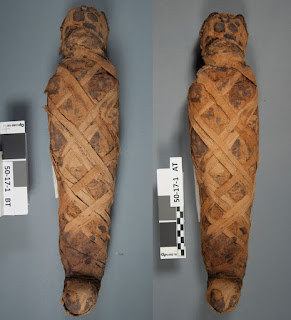 It doesn't show up so well in some of these images, so here is a detail of the cat's face, just because it's so cute! 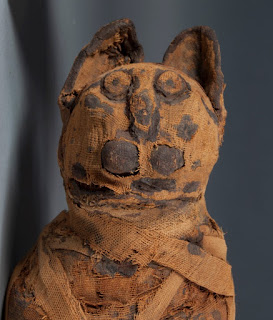 This cat mummy is now happily reinstalled in the Secrets and Science gallery, so you can see it anytime you visit the museum.