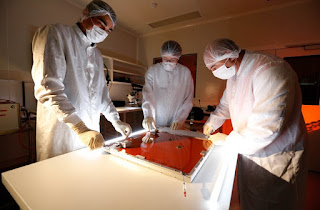 Egyptian Ministry of Antiquities, HIP Institute and the Faculty of Engineering (Cairo University) 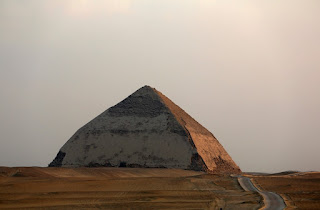 A new generation of muon telescopes has been built to detect the presence of secret structures and cavities in Egypt’s pyramids, a team of researchers announced on Friday.

Built by CEA (French Alternative Energies and Atomic Energy Commission) the devices add to an armory of innovative, non-destructive technologies employed to investigate four pyramids which are more than 4,500 years old. They include the Great Pyramid, Khafre or Chephren at Giza, the Bent pyramid and the Red pyramid at Dahshur.

The project, called ScanPyramids, is scheduled to last one year and is being carried out by a team from Cairo University’s Faculty of Engineering and the Paris-based non-profit organization Heritage, Innovation and Preservation (HIP Institute) under the authority of the Egyptian Ministry of Antiquities.

International researchers from Nagoya University and KEK (High Energy Accelerator Research Organization) in Japan and Laval University, Quebec, Canada, have also joined the project, which is separate from the search for the secret room in King Tut’s tomb.

“Now we welcome new researchers from the Irfu, a CEA fundamental research team,” Mehdi Tayoubi, co-director of the ScanPyramids mission with Hany Helal, professor at Cairo University’s Faculty of Engineering and former minister of research and higher education, said.

Irfu, which stands for Institute of Research into the Fundamental Laws of the Universe, gathers almost 800 researchers on astrophysics, nuclear physics and particle physics.

“These scientists have built dedicated muon telescopes for our mission. They are actually under construction and being tested in the CEA laboratories at Saclay, France,” Tayoubi told Discovery News.

“It is really exciting to see how a technology that just came out from a fundamental research laboratory can help us understand 4,500-year-old massive monuments with non visible physics particles,” he added.

Such muon telescopes will be used in addition to the infrared thermography, muon radiography, and 3-D reconstruction technologies that have already been employed to investigate the pyramids.

So far the researchers have detected striking thermal anomalies on the eastern and northern side of the Great Pyramid at Giza, which could possibly indicate an unknown cavity or internal structure.

A team led by specialist Kunihiro Morishima, from the Institute for Advanced Research of Nagoya University, Japan, installed 40 muon detector plates inside the lower chamber of the Bent pyramid at Dahshur in an attempt to capture cosmic particles.

The technology relies on the muons that continually shower the Earth’s surface. They emanate from the upper layers of Earth’s atmosphere, where they are created from collisions between cosmic rays of our galactic environment and the nuclei of atoms in the atmosphere.

“Just like X-rays pass through our bodies allowing us to visualize our skeleton, these elementary particles, weighing around 200 times more than electrons, can very easily pass through any structure, even large and thick rocks, such as mountains,” Tayoubi said.

Plate detectors placed inside the pyramid allow researchers to discern void areas — these are places where muons cross without problem — from denser areas where some muons are absorbed or deflected.

“In this way, we can for example better understand some thermal anomalies that have been spotted,” Tayoubi said.

“We are not in a hurry to make discoveries as we rather want to build this project step by step. Our goal is to inform about all the actions we take. We hope that other labs with very innovative technologies will join us,” Tayoubi said.

The researchers have detailed their findings so far in this video.

The next step will be to announce the first results from the moun detectors placed inside the Bent pyramid at Dahshur.

“They are still under analysis,” Tayoubi said.