Tourist attractions revenues decline from US$220 mn to US$38 mn: minister | Egypt Independent 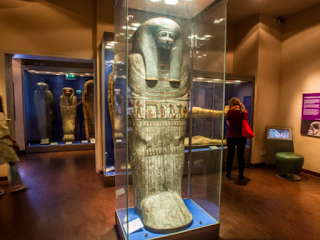 Revenues from historical tourist attractions decreased to US$38 million in 2015, compared to US$220 million in 2010, Antiquities Minister Khaled al-Anany announced in a statement Tuesday.

The number of tourists who visited Egypt in 2010 registered 15 million, compared to 6.3 million in 2015, the minister added.
The decreased inflow of tourists to Egypt has significantly affected the revenues of tourist attractions, which in turn affects funding for projects conducted by the Antiquities Ministry, said Anany.
According to Anany, the decline in revenues has negatively impacted many projects carried out by the ministry, especially restoration projects for archaeological sites and artifacts. Many projects have been suspended, and others were not initiated, he pointed out.
Tourism rates sharply declined after the January 25 revolution which toppled former President Hosni Mubarak in 2011. The sector was further strained by political turmoil over the past six years, beside several terrorist attacks, including the downing of a Russian passenger plane in Sinai in October 2015 when all 224 passengers and crew on board were killed.
The Antiquities Ministry has announced several offers in an attempt to attract tourists to Egypt.
In early November 2016, Anany disclosed a 20 percent discount on the Luxor Pass ticket, which entitles visitors to entry at all archaeological sites and museums in Luxor. The discount was extended in January 2017 to cover annual visit permits to archaeological sites for the period of one month.
Anany said the decision came ahead of New Year and Christmas celebrations, in order to encourage visits to archaeological sites and promote tourism. The move was an attempt to attract tourists to Egypt, while helping fund the ministry's work in restoring tombs and building museums, he said.
In another bid,  Anany announced in mid-November that the Egyptian Museum would be open to the public in the evenings twice a week to promote tourism.
Mohamed Ali, Deputy Chief for the museum, told Al-Borsa newspaper that evening ticket prices stood at LE120 for foreign visitors and at LE75 for day visits.
For Egyptians and Arabs, evening tickets cost LE20 and LE10 for the day visits. Evening visits are available from 5:30-9:00pm on Sundays and Thursdays.
In related news, the Egyptian Museum launched the Coffin Conservation Project on Tuesday, in cooperation with the US Embassy in Cairo, to document and restore 600 wooden coffins over the course of the next two years.
The museum won a grant from the Ambassadors Fund for Cultural Preservation (AFCP) in 2015 after an international competition to choose the winning project, the General Director of the Egyptian Museum Sabah Abdel Razek said at a press conference on Tuesday.
The project will cost US$130,000 and is the largest endeavor to conserve coffins in the world.