Mistress of the Cairo Museum 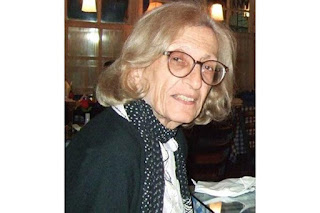 “Mistress of the Cairo Museum” May Trad passed away in December 2016 in Lebanon. An Egyptian Egyptologist of Lebanese descent, May was born in Cairo in 1930. Her early education took place in Cairo and Beirut, and after deciding to study Egyptology she graduated from Cairo University in 1968. She also studied anthropology at the American University in Cairo.

May started working at the Egyptian Museum in Cairo in 1982 and continued until her retirement. She also worked and taught at Egyptian and foreign institutions in Egypt such as Chicago House, the American University in Cairo, the American Research Centre in Egypt, the Hierakonpolis excavations, the Faculty of Tourism at Helwan University, and the Faculty of Tourism at Alexandria University. She did all she could to assist scholars, students, and visitors of the Egyptian Museum.

From 1976 to 1981, she was the librarian and general assistant to the director of Chicago House in Luxor. From 1976 to 1985, she was assistant to the director and was in charge of the library of the American Research Centre in Egypt. At these institutions she reorganised and built up collections of 28,000 volumes dealing with ancient, mediaeval, and modern Egypt. From 1982 to 1989, she was a visiting professor in the Department of Anthropology at the American University in Cairo where she taught courses on hieroglyphs. In the 1980s and 1990s she also taught archaeology at the Egyptian Museum in Cairo and Egyptian archaeology and hieroglyphs in English and French to students at Egyptian faculties of tourism.

In 1987, May became an honorary life member of the American Research Centre in Egypt. She was also secretary of the Friends of Shadi Abdel-Salam, an association formed in memory of the great Egyptian film director. She was a member of the committee of the Nubia Museum in 1994. In 1990, she obtained a Sir Alan Gardiner Travel Scholarship to prepare a guide to the Tutankhamun collection in the Egyptian Museum. She received a Fulbright grant for her work on the garden of the museum in 1993-1994.

She did a great deal in terms of exhibition work. She assisted in the preparation of the Antoinette Henein Pottery Exhibition in Cairo from 1980 to 1985, for example, and in 1982 she helped in the preparation of the Egyptian Exploration Society’s Centennial Anniversary Exhibition held at the Egyptian Museum in Cairo. In 1984, she wrote the labels for items exhibited at the Airport Museum covering Egyptian civilisation from prehistory to modern times.

The Ministry of Antiquities’ Scientific Publication Department intends to dedicate the next volume of the Bulletin of the Egyptian Museum to May Trad. And the ministry will make a special award in her name at the 2017 Festival of Egyptian Archaeologists on 15 January as a way of marking her enormous contributions to Egypt, Egyptology, and the scholars and students in the field.

May was a great friend and was loved by all. Her death is a great loss to Egyptology and to archaeology as a whole. She will be sorely missed and eternally remembered.