Before the bling of Tutankhamun


Before the bling of Tutankhamun 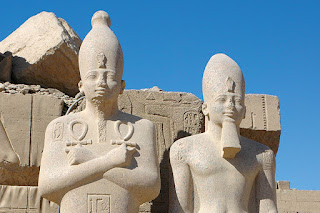 Statues of pharoahs at Karnak, dating from the Middle Kingdom

A History of Ancient Egypt: From the Great Pyramid to the Fall of the Middle Kingdom John Romer

If you read the first volume of John Romer’s A History of Egypt, which traces events along the Nile from prehistory to the pyramid age, you will understand why he thinks Egyptology is not a science. It is hard, perhaps impossible, to be exact about anything when most of your knowledge is based on deduction and when new discoveries can overturn accepted theories. In the 1,000 years covered in this second volume, starting around 2600 BC, would it be easier for Romer to present facts and express certainty — to be scientific?

One of the surprises of the pyramid age, as Romer explains very clearly here, is the lack of information concerning what people believed in and even how they lived. For while the Great Pyramid and its many neighbours from the same era stand as eloquent testimony to the capabilities of the ancient Egyptians, they tell us little about how or why they were constructed. This, in part, explains the appeal of what some Egyptologists call the pyramidiots, people who have suggested that the pyramids were built by spacemen or that their massive stones were sung into place.

So why read a book on the subject? For one thing, because although Romer doesn’t have all the answers, he has spent much of his 75 years engaged with Egypt’s past and he has a command of material and of language that makes this a fascinating tale. In the first volume he charted the social and political effects of climate change, as the land beyond the Egyptian Nile valley turned from savannah to desert, leaving people in the region entirely dependent on the river and its annual flood. This second volume looks at the achievements of the first pharaonic state, at its decline and its revival in the Middle
Kingdom.

He starts by dismissing what he considers to be outdated ideas. Egyptology was a product of the Enlightenment, and boosted by Napoleon’s invasion of Egypt in 1798, an expedition more notable for its scholars than its soldiers. The subsequent deciphering of hieroglyphs, announced by Jean François Champollion in 1822, provided enough information, when taken along with the surviving monuments and antiquities, for historians to piece together an account of the Egyptian past. But as Romer points out, they reconstructed Egypt in their own image, assuming that ideas of state, kingship, citizenship, perhaps even God, might be similar to those of the early 19th century. Romer argues convincingly that they were not, that they belong to a pre-rational age that expressed itself not in words but in objects, structures and images.

When we look at the pyramids, we see their age, their immense size, the achievement of their construction without drills, cranes or trucks. An ancient Egyptian would have seen them as a sign of the greatness of his people, but also as a connection with the past, with the gods and the stars. Similarly with rituals and processions. Romer explains that when priests in pleated linen kilts, led by the king, carried images of the gods in procession, they were joining ‘with the gods in cosmic and geographic harmony, in that endless cycle of events in which the living and the dead, the sun, the seasons, the families of the gods and kings would all participate.’

Although Romer resists repeating Herodotus’s cliché, Egypt really was the gift of the Nile and the circle of life that was the Egyptian year was prescribed by the river’s rise each summer, the resultant flood, sowing and harvest, the three seasons. The pyramids were by-products of this cycle, for major state-sponsored projects were only possible when abundant harvests allowed for a surplus. When the Nile entered a cycle of low floods, it brought an end to the major constructions and, eventually, to the Old Kingdom.

The Middle Kingdom, beginning around 2000 BC, is often passed over by visitors to Egypt and by general readers in a hurry to get from the Old Kingdom to the New, from the Giza Pyramids to the bling of the Valley of the Kings. Recent research supports Romer’s view that the 350 years of the Middle Kingdom were one of Egypt’s golden ages. Its artists created what are here described as ‘some of the most moving images that humanity has ever made’ and its scribes left texts that throw more light on this period than on the pyramid age. But in spite of the wealth of textual material, Romer stands by his belief that the Egypt of the pharaohs ‘found its most profound and typical expressions in making and moving things.’ And that statement, which I find convincing, goes some way towards explaining why new discoveries keep on reshaping ideas of the Egyptian past.

Romer’s evocative and surprisingly passionate descriptions of the Middle Kingdom, with its glorious court, thriving international trade and bountiful Nile, have a sense of idyll about them. The precise location of the Middle Kingdom capital, a place known as Itj-towy, was unknown until very recently, when it was identified by satellite imaging. That bump in the ground — all that is left of the ancient city — may offer new revelations to contradict some of what has been proposed here. But I doubt that the spirits of anyone who lived in Itj-towy will find cause to object to this magisterial history.